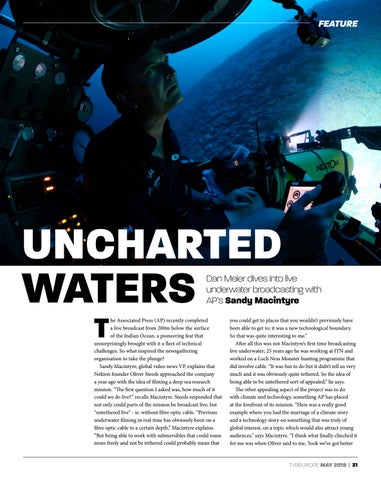 he Associated Press (AP) recently completed a live broadcast from 200m below the surface of the Indian Ocean, a pioneering feat that unsurprisingly brought with it a fleet of technical challenges. So what inspired the newsgathering organisation to take the plunge? Sandy Macintyre, global video news VP, explains that Nekton founder Oliver Steeds approached the company a year ago with the idea of filming a deep sea research mission. “The first question I asked was, how much of it could we do live?” recalls Macintyre. Steeds responded that not only could parts of the mission be broadcast live, but “untethered live” - ie. without fibre optic cable. “Previous underwater filming in real time has obviously been on a fibre optic cable to a certain depth,” Macintyre explains. “But being able to work with submersibles that could roam more freely and not be tethered could probably mean that

you could get to places that you wouldn’t previously have been able to get to; it was a new technological boundary. So that was quite interesting to me.” After all this was not Macintyre’s first time broadcasting live underwater; 25 years ago he was working at ITN and worked on a Loch Ness Monster hunting programme that did involve cable. “It was fun to do but it didn’t tell us very much and it was obviously quite tethered. So the idea of being able to be untethered sort of appealed,” he says. The other appealing aspect of the project was to do with climate and technology, something AP has placed at the forefront of its mission. “Here was a really good example where you had the marriage of a climate story and a technology story on something that was truly of global interest, on a topic which would also attract young audiences,” says Macintyre. “I think what finally clinched it for me was when Oliver said to me, ‘look we’ve got better