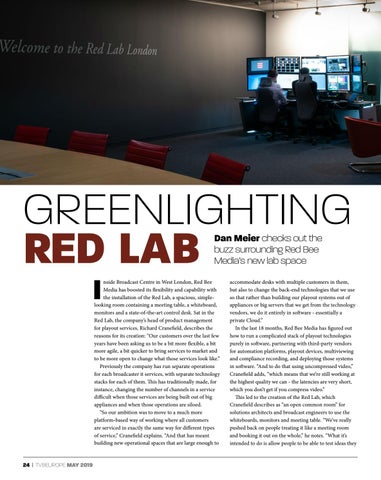 nside Broadcast Centre in West London, Red Bee Media has boosted its flexibility and capability with the installation of the Red Lab, a spacious, simplelooking room containing a meeting table, a whiteboard, monitors and a state-of-the-art control desk. Sat in the Red Lab, the company’s head of product management for playout services, Richard Cranefield, describes the reasons for its creation: “Our customers over the last few years have been asking us to be a bit more flexible, a bit more agile, a bit quicker to bring services to market and to be more open to change what those services look like.” Previously the company has run separate operations for each broadcaster it services, with separate technology stacks for each of them. This has traditionally made, for instance, changing the number of channels in a service difficult when those services are being built out of big appliances and when those operations are siloed. “So our ambition was to move to a much more platform-based way of working where all customers are serviced in exactly the same way for different types of service,” Cranefield explains. “And that has meant building new operational spaces that are large enough to

accommodate desks with multiple customers in them, but also to change the back-end technologies that we use so that rather than building our playout systems out of appliances or big servers that we get from the technology vendors, we do it entirely in software - essentially a private Cloud.” In the last 18 months, Red Bee Media has figured out how to run a complicated stack of playout technologies purely in software, partnering with third-party vendors for automation platforms, playout devices, multiviewing and compliance recording, and deploying those systems in software. “And to do that using uncompressed video,” Cranefield adds, “which means that we’re still working at the highest quality we can - the latencies are very short, which you don’t get if you compress video.” This led to the creation of the Red Lab, which Cranefield describes as “an open common room” for solutions architects and broadcast engineers to use the whiteboards, monitors and meeting table. “We’ve really pushed back on people treating it like a meeting room and booking it out on the whole,” he notes. “What it’s intended to do is allow people to be able to test ideas they