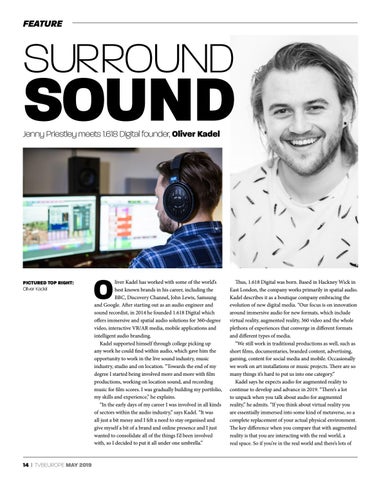 liver Kadel has worked with some of the world’s best known brands in his career, including the BBC, Discovery Channel, John Lewis, Samsung and Google. After starting out as an audio engineer and sound recordist, in 2014 he founded 1.618 Digital which offers immersive and spatial audio solutions for 360-degree video, interactive VR/AR media, mobile applications and intelligent audio branding. Kadel supported himself through college picking up any work he could find within audio, which gave him the opportunity to work in the live sound industry, music industry, studio and on location. “Towards the end of my degree I started being involved more and more with film productions, working on location sound, and recording music for film scores. I was gradually building my portfolio, my skills and experience,” he explains. “In the early days of my career I was involved in all kinds of sectors within the audio industry,” says Kadel. “It was all just a bit messy and I felt a need to stay organised and give myself a bit of a brand and online presence and I just wanted to consolidate all of the things I’d been involved with, so I decided to put it all under one umbrella.”

Thus, 1.618 Digital was born. Based in Hackney Wick in East London, the company works primarily in spatial audio. Kadel describes it as a boutique company embracing the evolution of new digital media. “Our focus is on innovation around immersive audio for new formats, which include virtual reality, augmented reality, 360 video and the whole plethora of experiences that converge in different formats and different types of media. “We still work in traditional productions as well, such as short films, documentaries, branded content, advertising, gaming, content for social media and mobile. Occasionally we work on art installations or music projects. There are so many things it’s hard to put us into one category.” Kadel says he expects audio for augmented reality to continue to develop and advance in 2019. “There’s a lot to unpack when you talk about audio for augmented reality,” he admits. “If you think about virtual reality you are essentially immersed into some kind of metaverse, so a complete replacement of your actual physical environment. The key difference when you compare that with augmented reality is that you are interacting with the real world, a real space. So if you’re in the real world and there’s lots of