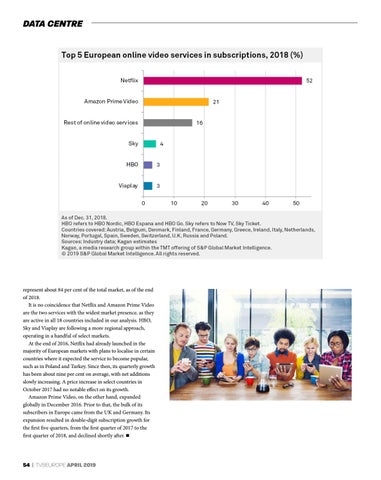 represent about 84 per cent of the total market, as of the end of 2018. It is no coincidence that Netflix and Amazon Prime Video are the two services with the widest market presence, as they are active in all 18 countries included in our analysis. HBO, Sky and Viaplay are following a more regional approach, operating in a handful of select markets. At the end of 2016, Netflix had already launched in the majority of European markets with plans to localise in certain countries where it expected the service to become popular, such as in Poland and Turkey. Since then, its quarterly growth has been about nine per cent on average, with net additions slowly increasing. A price increase in select countries in October 2017 had no notable effect on its growth. Amazon Prime Video, on the other hand, expanded globally in December 2016. Prior to that, the bulk of its subscribers in Europe came from the UK and Germany. Its expansion resulted in double-digit subscription growth for the first five quarters, from the first quarter of 2017 to the first quarter of 2018, and declined shortly after. n