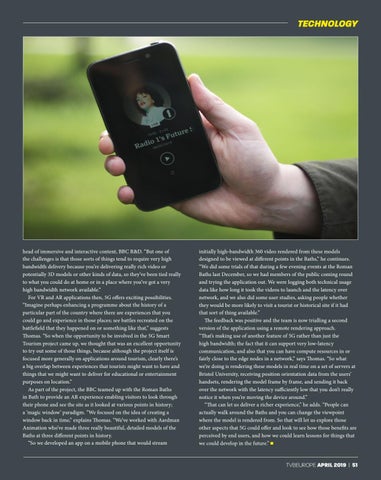 head of immersive and interactive content, BBC R&D. “But one of the challenges is that those sorts of things tend to require very high bandwidth delivery because you’re delivering really rich video or potentially 3D models or other kinds of data, so they’ve been tied really to what you could do at home or in a place where you’ve got a very high bandwidth network available.” For VR and AR applications then, 5G offers exciting possibilities. “Imagine perhaps enhancing a programme about the history of a particular part of the country where there are experiences that you could go and experience in those places; see battles recreated on the battlefield that they happened on or something like that,” suggests Thomas. “So when the opportunity to be involved in the 5G Smart Tourism project came up, we thought that was an excellent opportunity to try out some of those things, because although the project itself is focused more generally on applications around tourism, clearly there’s a big overlap between experiences that tourists might want to have and things that we might want to deliver for educational or entertainment purposes on location.” As part of the project, the BBC teamed up with the Roman Baths in Bath to provide an AR experience enabling visitors to look through their phone and see the site as it looked at various points in history; a ‘magic window’ paradigm. “We focused on the idea of creating a window back in time,” explains Thomas. “We’ve worked with Aardman Animation who’ve made three really beautiful, detailed models of the Baths at three different points in history. “So we developed an app on a mobile phone that would stream

initially high-bandwidth 360 video rendered from these models designed to be viewed at different points in the Baths,” he continues. “We did some trials of that during a few evening events at the Roman Baths last December, so we had members of the public coming round and trying the application out. We were logging both technical usage data like how long it took the videos to launch and the latency over network, and we also did some user studies, asking people whether they would be more likely to visit a tourist or historical site if it had that sort of thing available.” The feedback was positive and the team is now trialling a second version of the application using a remote rendering approach. “That’s making use of another feature of 5G rather than just the high bandwidth; the fact that it can support very low-latency communication, and also that you can have compute resources in or fairly close to the edge nodes in a network,” says Thomas. “So what we’re doing is rendering these models in real time on a set of servers at Bristol University, receiving position orientation data from the users’ handsets, rendering the model frame by frame, and sending it back over the network with the latency sufficiently low that you don’t really notice it when you’re moving the device around.” “That can let us deliver a richer experience,” he adds. “People can actually walk around the Baths and you can change the viewpoint where the model is rendered from. So that will let us explore those other aspects that 5G could offer and look to see how those benefits are perceived by end users, and how we could learn lessons for things that we could develop in the future.” n