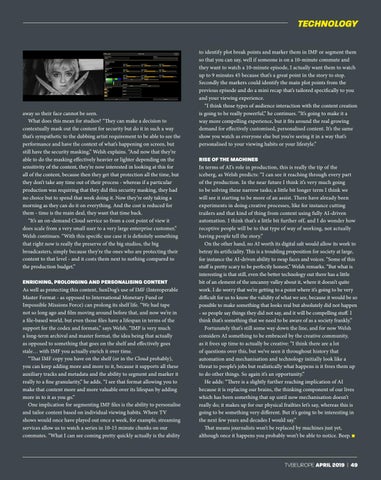 away so their face cannot be seen. What does this mean for studios? “They can make a decision to contextually mask out the content for security but do it in such a way that’s sympathetic to the dubbing artist requirement to be able to see the performance and have the context of what’s happening on screen, but still have the security masking,” Welsh explains. “And now that they’re able to do the masking effectively heavier or lighter depending on the sensitivity of the content, they’re now interested in looking at this for all of the content, because then they get that protection all the time, but they don’t take any time out of their process - whereas if a particular production was requiring that they did this security masking, they had no choice but to spend that week doing it. Now they’re only taking a morning as they can do it on everything. And the cost is reduced for them - time is the main deal, they want that time back. “It’s an on-demand Cloud service so from a cost point of view it does scale from a very small user to a very large enterprise customer,” Welsh continues. “With this specific use case it is definitely something that right now is really the preserve of the big studios, the big broadcasters, simply because they’re the ones who are protecting their content to that level - and it costs them next to nothing compared to the production budget.” ENRICHING, PROLONGING AND PERSONALISING CONTENT As well as protecting this content, SunDog’s use of IMF (Interoperable Master Format - as opposed to International Monetary Fund or Impossible Missions Force) can prolong its shelf life. “We had tape not so long ago and film moving around before that, and now we’re in a file-based world, but even those files have a lifespan in terms of the support for the codex and formats,” says Welsh. “IMF is very much a long-term archival and master format, the idea being that actually as opposed to something that goes on the shelf and effectively goes stale… with IMF you actually enrich it over time. “That IMF copy you have on the shelf (or in the Cloud probably), you can keep adding more and more to it, because it supports all these auxiliary tracks and metadata and the ability to segment and marker it really to a fine granularity,” he adds. “I see that format allowing you to make that content more and more valuable over its lifespan by adding more in to it as you go.” One implication for segmenting IMF files is the ability to personalise and tailor content based on individual viewing habits. Where TV shows would once have played out once a week, for example, streaming services allow us to watch a series in 10-15 minute chunks on our commutes. “What I can see coming pretty quickly actually is the ability

to identify plot break points and marker them in IMF or segment them so that you can say, well if someone is on a 10-minute commute and they want to watch a 10-minute episode, I actually want them to watch up to 9 minutes 45 because that’s a great point in the story to stop. Secondly the markers could identify the main plot points from the previous episode and do a mini recap that’s tailored specifically to you and your viewing experience. “I think those types of audience interaction with the content creation is going to be really powerful,” he continues. “It’s going to make it a way more compelling experience, but it fits around the real growing demand for effectively customised, personalised content. It’s the same show you watch as everyone else but you’re seeing it in a way that’s personalised to your viewing habits or your lifestyle.” RISE OF THE MACHINES In terms of AI’s role in production, this is really the tip of the iceberg, as Welsh predicts: “I can see it reaching through every part of the production. In the near future I think it’s very much going to be solving these narrow tasks; a little bit longer term I think we will see it starting to be more of an assist. There have already been experiments in doing creative processes, like for instance cutting trailers and that kind of thing from content using fully AI-driven automation. I think that’s a little bit further off, and I do wonder how receptive people will be to that type of way of working, not actually having people tell the story.” On the other hand, no AI worth its digital salt would allow its work to betray its artificiality. This is a troubling proposition for society at large, for instance the AI-driven ability to swap faces and voices. “Some of this stuff is pretty scary to be perfectly honest,” Welsh remarks. “But what is interesting is that still, even the better technology out there has a little bit of an element of the uncanny valley about it, where it doesn’t quite work. I do worry that we’re getting to a point where it’s going to be very difficult for us to know the validity of what we see, because it would be so possible to make something that looks real but absolutely did not happen - so people say things they did not say, and it will be compelling stuff. I think that’s something that we need to be aware of as a society frankly.” Fortunately that’s still some way down the line, and for now Welsh considers AI something to be embraced by the creative community, as it frees up time to actually be creative: “I think there are a lot of questions over this, but we’ve seen it throughout history that automation and mechanisation and technology initially look like a threat to people’s jobs but realistically what happens is it frees them up to do other things. So again it’s an opportunity.” He adds: “There is a slightly further reaching implication of AI because it is replacing our brains, the thinking component of our lives which has been something that up until now mechanisation doesn’t really do; it makes up for our physical frailties let’s say, whereas this is going to be something very different. But it’s going to be interesting in the next few years and decades I would say.” That means journalists won’t be replaced by machines just yet, although once it happens you probably won’t be able to notice. Beep. n