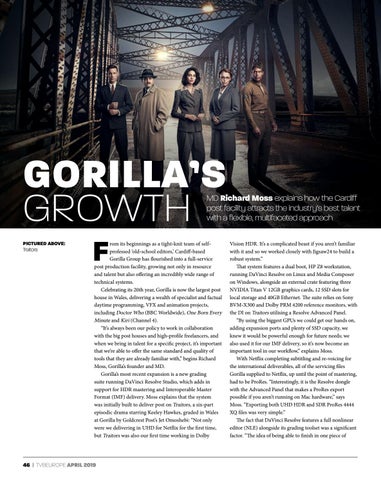 rom its beginnings as a tight-knit team of selfprofessed ‘old-school editors,’ Cardiff-based Gorilla Group has flourished into a full-service post production facility, growing not only in resource and talent but also offering an incredibly wide range of technical systems. Celebrating its 20th year, Gorilla is now the largest post house in Wales, delivering a wealth of specialist and factual daytime programming, VFX and animation projects, including Doctor Who (BBC Worldwide), One Born Every Minute and Kiri (Channel 4). “It’s always been our policy to work in collaboration with the big post houses and high-profile freelancers, and when we bring in talent for a specific project, it’s important that we’re able to offer the same standard and quality of tools that they are already familiar with,” begins Richard Moss, Gorilla’s founder and MD. Gorilla’s most recent expansion is a new grading suite running DaVinci Resolve Studio, which adds in support for HDR mastering and Interoperable Master Format (IMF) delivery. Moss explains that the system was initially built to deliver post on Traitors, a six-part episodic drama starring Keeley Hawkes, graded in Wales at Gorilla by Goldcrest Post’s Jet Omoshebi: “Not only were we delivering in UHD for Netflix for the first time, but Traitors was also our first time working in Dolby

Vision HDR. It’s a complicated beast if you aren’t familiar with it and so we worked closely with Jigsaw24 to build a robust system.” That system features a dual boot, HP Z8 workstation, running DaVinci Resolve on Linux and Media Composer on Windows, alongside an external crate featuring three NVIDIA Titan V 12GB graphics cards, 12 SSD slots for local storage and 40GB Ethernet. The suite relies on Sony BVM-X300 and Dolby PRM 4200 reference monitors, with the DI on Traitors utilising a Resolve Advanced Panel. “By using the biggest GPUs we could get our hands on, adding expansion ports and plenty of SSD capacity, we knew it would be powerful enough for future needs; we also used it for our IMF delivery, so it’s now become an important tool in our workflow,” explains Moss. With Netflix completing subtitling and re-voicing for the international deliverables, all of the servicing files Gorilla supplied to Netflix, up until the point of mastering, had to be ProRes. “Interestingly, it is the Resolve dongle with the Advanced Panel that makes a ProRes export possible if you aren’t running on Mac hardware,” says Moss. “Exporting both UHD HDR and SDR ProRes 4444 XQ files was very simple.” The fact that DaVinci Resolve features a full nonlinear editor (NLE) alongside its grading toolset was a significant factor. “The idea of being able to finish in one piece of