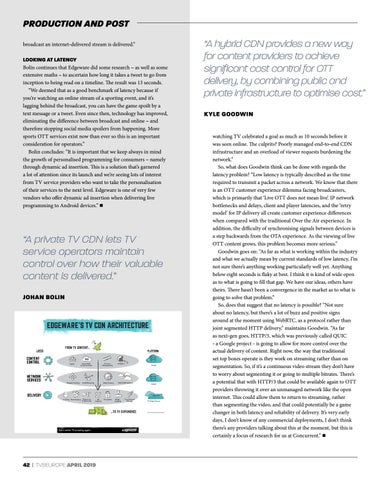 PRODUCTION AND POST broadcast an internet-delivered stream is delivered.” LOOKING AT LATENCY Bolin continues that Edgeware did some research – as well as some extensive maths – to ascertain how long it takes a tweet to go from inception to being read on a timeline. The result was 13 seconds. “We deemed that as a good benchmark of latency because if you’re watching an online stream of a sporting event, and it’s lagging behind the broadcast, you can have the game spoilt by a text message or a tweet. Even since then, technology has improved, eliminating the difference between broadcast and online – and therefore stopping social media spoilers from happening. More sports OTT services exist now than ever so this is an important consideration for operators.” Bolin concludes: “It is important that we keep always in mind the growth of personalised programming for consumers – namely through dynamic ad insertion. This is a solution that’s garnered a lot of attention since its launch and we’re seeing lots of interest from TV service providers who want to take the personalisation of their services to the next level. Edgeware is one of very few vendors who offer dynamic ad insertion when delivering live programming to Android devices.” n

“A hybrid CDN provides a new way for content providers to achieve significant cost control for OTT delivery, by combining public and private infrastructure to optimise cost.” KYLE GOODWIN watching TV celebrated a goal as much as 10 seconds before it was seen online. The culprits? Poorly managed end-to-end CDN infrastructure and an overload of viewer requests burdening the network.” So, what does Goodwin think can be done with regards the latency problem? “Low latency is typically described as the time required to transmit a packet across a network. We know that there is an OTT customer experience dilemma facing broadcasters, which is primarily that ‘Live OTT does not mean live’. IP network bottlenecks and delays, client and player latencies, and the ‘retry model’ for IP delivery all create customer experience differences when compared with the traditional Over the Air experience. In addition, the difficulty of synchronising signals between devices is a step backwards from the OTA experience. As the viewing of live OTT content grows, this problem becomes more serious.” Goodwin goes on: “As far as what is working within the industry and what we actually mean by current standards of low latency, I’m not sure there’s anything working particularly well yet. Anything below eight seconds is flaky at best. I think it is kind of wide open as to what is going to fill that gap. We have our ideas, others have theirs. There hasn’t been a convergence in the market as to what is going to solve that problem.” So, does that suggest that no latency is possible? “Not sure about no latency, but there’s a lot of buzz and positive signs around at the moment using WebRTC, as a protocol rather than joint segmented HTTP delivery,” maintains Goodwin. “As far as next-gen goes, HTTP/3, which was previously called QUIC - a Google project - is going to allow for more control over the actual delivery of content. Right now, the way that traditional set top boxes operate is they work on streaming rather than on segmentation. So, if it’s a continuous video stream they don’t have to worry about segmenting it or going to multiple bitrates. There’s a potential that with HTTP/3 that could be available again to OTT providers throwing it over an unmanaged network like the open internet. This could allow them to return to streaming, rather than segmenting the video, and that could potentially be a game changer in both latency and reliability of delivery. It’s very early days, I don’t know of any commercial deployments, I don’t think there’s any providers talking about this at the moment, but this is certainly a focus of research for us at Concurrent.” n