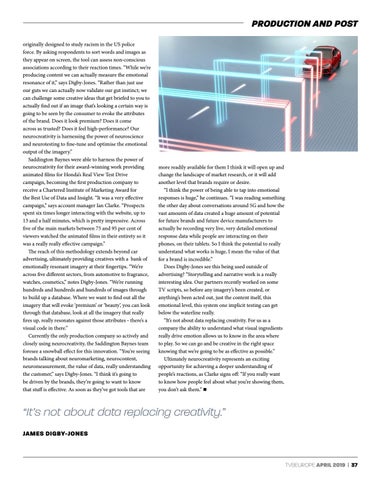 PRODUCTION AND POST originally designed to study racism in the US police force. By asking respondents to sort words and images as they appear on screen, the tool can assess non-conscious associations according to their reaction times. “While we’re producing content we can actually measure the emotional resonance of it,” says Digby-Jones. “Rather than just use our guts we can actually now validate our gut instinct; we can challenge some creative ideas that get briefed to you to actually find out if an image that’s looking a certain way is going to be seen by the consumer to evoke the attributes of the brand. Does it look premium? Does it come across as trusted? Does it feel high-performance? Our neurocreativity is harnessing the power of neuroscience and neurotesting to fine-tune and optimise the emotional output of the imagery.” Saddington Baynes were able to harness the power of neurocreativity for their award-winning work providing animated films for Honda’s Real View Test Drive campaign, becoming the first production company to receive a Chartered Institute of Marketing Award for the Best Use of Data and Insight. “It was a very effective campaign,” says account manager Ian Clarke. “Prospects spent six times longer interacting with the website, up to 13 and a half minutes, which is pretty impressive. Across five of the main markets between 75 and 95 per cent of viewers watched the animated films in their entirety so it was a really really effective campaign.” The reach of this methodology extends beyond car advertising, ultimately providing creatives with a bank of emotionally resonant imagery at their fingertips. “We’re across five different sectors, from automotive to fragrance, watches, cosmetics,” notes Digby-Jones. “We’re running hundreds and hundreds and hundreds of images through to build up a database. Where we want to find out all the imagery that will evoke ‘premium’ or ‘beauty’, you can look through that database, look at all the imagery that really fires up, really resonates against those attributes - there’s a visual code in there.” Currently the only production company so actively and closely using neurocreativity, the Saddington Baynes team foresee a snowball effect for this innovation. “You’re seeing brands talking about neuromarketing, neurocontent, neuromeasurement, the value of data, really understanding the customer,” says Digby-Jones. “I think it’s going to be driven by the brands, they’re going to want to know that stuff is effective. As soon as they’ve got tools that are

more readily available for them I think it will open up and change the landscape of market research, or it will add another level that brands require or desire. “I think the power of being able to tap into emotional responses is huge,” he continues. “I was reading something the other day about conversations around 5G and how the vast amounts of data created a huge amount of potential for future brands and future device manufacturers to actually be recording very live, very detailed emotional response data while people are interacting on their phones, on their tablets. So I think the potential to really understand what works is huge, I mean the value of that for a brand is incredible.” Does Digby-Jones see this being used outside of advertising? “Storytelling and narrative work is a really interesting idea. Our partners recently worked on some TV scripts, so before any imagery’s been created, or anything’s been acted out, just the content itself, this emotional level, this system one implicit testing can get below the waterline really. “It’s not about data replacing creativity. For us as a company the ability to understand what visual ingredients really drive emotion allows us to know in the area where to play. So we can go and be creative in the right space knowing that we’re going to be as effective as possible.” Ultimately neurocreativity represents an exciting opportunity for achieving a deeper understanding of people’s reactions, as Clarke signs off: “If you really want to know how people feel about what you’re showing them, you don’t ask them.” n