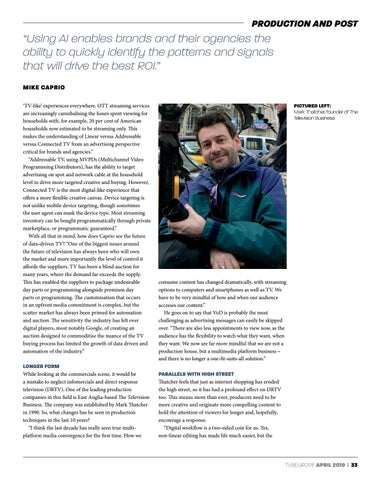 “Using AI enables brands and their agencies the ability to quickly identify the patterns and signals that will drive the best ROI.” MIKE CAPRIO ‘TV-like’ experiences everywhere. OTT streaming services are increasingly cannibalising the hours spent viewing for households with, for example, 20 per cent of American households now estimated to be streaming only. This makes the understanding of Linear versus Addressable versus Connected TV from an advertising perspective critical for brands and agencies.” “Addressable TV, using MVPDs (Multichannel Video Programming Distributors), has the ability to target advertising on spot and network cable at the household level to drive more targeted creative and buying. However, Connected TV is the most digital-like experience that offers a more flexible creative canvas. Device targeting is not unlike mobile device targeting, though sometimes the user agent can mask the device type. Most streaming inventory can be bought programmatically through private marketplace, or programmatic guaranteed.” With all that in mind, how does Caprio see the future of data-driven TV? “One of the biggest issues around the future of television has always been who will own the market and more importantly the level of control it affords the suppliers. TV has been a blind auction for many years, where the demand far exceeds the supply. This has enabled the suppliers to package undesirable day parts or programming alongside premium day parts or programming. The customisation that occurs in an upfront media commitment is complex, but the scatter market has always been primed for automation and auction. The sensitivity the industry has felt over digital players, most notably Google, of creating an auction designed to commoditise the nuance of the TV buying process has limited the growth of data driven and automation of the industry.” LONGER FORM While looking at the commercials scene, it would be a mistake to neglect infomercials and direct response television (DRTV). One of the leading production companies in this field is East Anglia-based The Television Business. The company was established by Mark Thatcher in 1990. So, what changes has he seen in production techniques in the last 10 years? “I think the last decade has really seen true multiplatform media convergence for the first time. How we

consume content has changed dramatically, with streaming options to computers and smartphones as well as TV. We have to be very mindful of how and when our audience accesses our content.” He goes on to say that VoD is probably the most challenging as advertising messages can easily be skipped over. “There are also less appointments to view now, as the audience has the flexibility to watch what they want, when they want. We now are far more mindful that we are not a production house, but a multimedia platform business – and there is no longer a one-fit-suits-all solution.” PARALLELS WITH HIGH STREET Thatcher feels that just as internet shopping has eroded the high street, so it has had a profound effect on DRTV too. This means more than ever, producers need to be more creative and originate more compelling content to hold the attention of viewers for longer and, hopefully, encourage a response. “Digital workflow is a two-sided coin for us. Yes, non-linear editing has made life much easier, but the