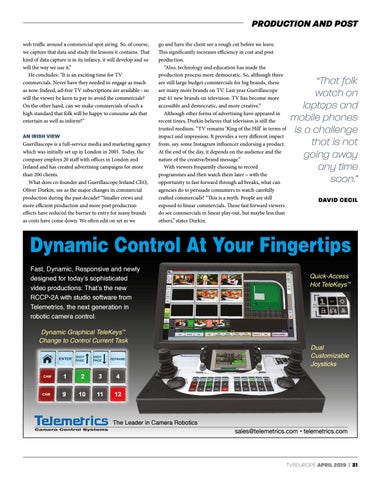 PRODUCTION AND POST web traffic around a commercial spot airing. So, of course, we capture that data and study the lessons it contains. That kind of data capture is in its infancy, it will develop and so will the way we use it.” He concludes: “It is an exciting time for TV commercials. Never have they needed to engage as much as now. Indeed, ad-free TV subscriptions are available - so will the viewer be keen to pay to avoid the commercials? On the other hand, can we make commercials of such a high standard that folk will be happy to consume ads that entertain as well as inform?” AN IRISH VIEW Guerillascope is a full-service media and marketing agency which was initially set up in London in 2001. Today, the company employs 20 staff with offices in London and Ireland and has created advertising campaigns for more than 200 clients. What does co-founder and Guerillascope Ireland CEO, Oliver Durkin, see as the major changes in commercial production during the past decade? “Smaller crews and more efficient production and more post production effects have reduced the barrier to entry for many brands as costs have come down. We often edit on set as we

go and have the client see a rough cut before we leave. This significantly increases efficiency in cost and post production. “Also, technology and education has made the production process more democratic. So, although there are still large budget commercials for big brands, there are many more brands on TV. Last year Guerillascope put 41 new brands on television. TV has become more accessible and democratic, and more creative.” Although other forms of advertising have appeared in recent times, Durkin believes that television is still the trusted medium. “TV remains ‘King of the Hill’ in terms of impact and impression. It provides a very different impact from, say, some Instagram influencer endorsing a product. At the end of the day, it depends on the audience and the nature of the creative/brand message.” With viewers frequently choosing to record programmes and then watch them later – with the opportunity to fast forward through ad breaks, what can agencies do to persuade consumers to watch carefully crafted commercials? “This is a myth. People are still exposed to linear commercials. Those fast forward viewers do see commercials in linear play-out, but maybe less than others,” states Durkin.

“That folk watch on laptops and mobile phones is a challenge that is not going away any time soon.” DAVID CECIL

The Leader in Camera Robotics