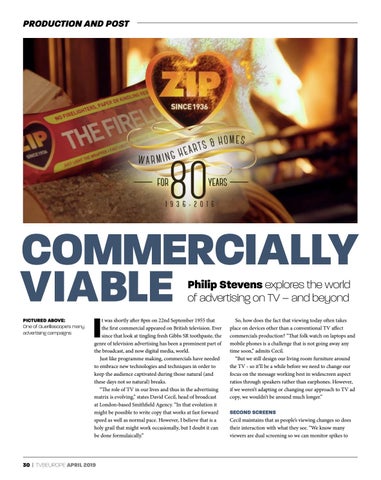 PICTURED ABOVE: One of Guerillascope’s many advertising campaigns

t was shortly after 8pm on 22nd September 1955 that the first commercial appeared on British television. Ever since that look at tingling fresh Gibbs SR toothpaste, the genre of television advertising has been a prominent part of the broadcast, and now digital media, world. Just like programme making, commercials have needed to embrace new technologies and techniques in order to keep the audience captivated during those natural (and these days not so natural) breaks. “The role of TV in our lives and thus in the advertising matrix is evolving,” states David Cecil, head of broadcast at London-based Smithfield Agency. “In that evolution it might be possible to write copy that works at fast forward speed as well as normal pace. However, I believe that is a holy grail that might work occasionally, but I doubt it can be done formulaically.”

So, how does the fact that viewing today often takes place on devices other than a conventional TV affect commercials production? “That folk watch on laptops and mobile phones is a challenge that is not going away any time soon,” admits Cecil. “But we still design our living room furniture around the TV - so it’ll be a while before we need to change our focus on the message working best in widescreen aspect ratios through speakers rather than earphones. However, if we weren’t adapting or changing our approach to TV ad copy, we wouldn’t be around much longer.” SECOND SCREENS Cecil maintains that as people’s viewing changes so does their interaction with what they see. “We know many viewers are dual screening so we can monitor spikes to