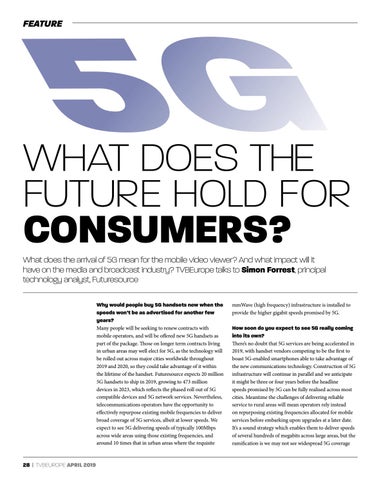 WHAT DOES THE FUTURE HOLD FOR CONSUMERS? What does the arrival of 5G mean for the mobile video viewer? And what impact will it have on the media and broadcast industry? TVBEurope talks to Simon Forrest, principal technology analyst, Futuresource Why would people buy 5G handsets now when the speeds won’t be as advertised for another few years? Many people will be seeking to renew contracts with mobile operators, and will be offered new 5G handsets as part of the package. Those on longer term contracts living in urban areas may well elect for 5G, as the technology will be rolled out across major cities worldwide throughout 2019 and 2020, so they could take advantage of it within the lifetime of the handset. Futuresource expects 20 million 5G handsets to ship in 2019, growing to 473 million devices in 2023, which reflects the phased roll out of 5G compatible devices and 5G network services. Nevertheless, telecommunications operators have the opportunity to effectively repurpose existing mobile frequencies to deliver broad coverage of 5G services, albeit at lower speeds. We expect to see 5G delivering speeds of typically 100Mbps across wide areas using those existing frequencies, and around 10 times that in urban areas where the requisite

mmWave (high frequency) infrastructure is installed to provide the higher gigabit speeds promised by 5G. How soon do you expect to see 5G really coming into its own? There’s no doubt that 5G services are being accelerated in 2019, with handset vendors competing to be the first to boast 5G-enabled smartphones able to take advantage of the new communications technology. Construction of 5G infrastructure will continue in parallel and we anticipate it might be three or four years before the headline speeds promised by 5G can be fully realised across most cities. Meantime the challenges of delivering reliable service to rural areas will mean operators rely instead on repurposing existing frequencies allocated for mobile services before embarking upon upgrades at a later date. It’s a sound strategy which enables them to deliver speeds of several hundreds of megabits across large areas, but the ramification is we may not see widespread 5G coverage