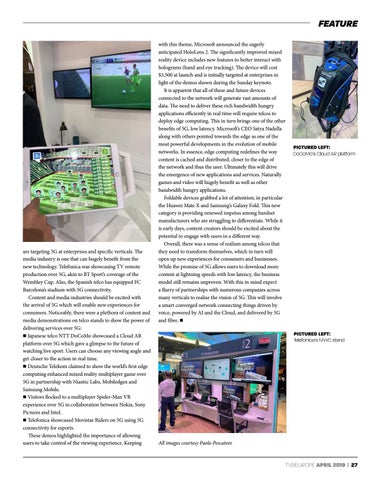 are targeting 5G at enterprises and specific verticals. The media industry is one that can hugely benefit from the new technology. Telefonica was showcasing TV remote production over 5G; akin to BT Sport’s coverage of the Wembley Cup. Also, the Spanish telco has equipped FC Barcelona’s stadium with 5G connectivity. Content and media industries should be excited with the arrival of 5G which will enable new experiences for consumers. Noticeably, there were a plethora of content and media demonstrations on telco stands to show the power of delivering services over 5G: n Japanese telco NTT DoCoMo showcased a Cloud AR platform over 5G which gave a glimpse to the future of watching live sport. Users can choose any viewing angle and get closer to the action in real time. n Deutsche Telekom claimed to show the world’s first edge computing enhanced mixed reality multiplayer game over 5G in partnership with Niantic Labs, Mobiledgex and Samsung Mobile. n Visitors flocked to a multiplayer Spider-Man VR experience over 5G in collaboration between Nokia, Sony Pictures and Intel. n Telefonica showcased Movistar Riders on 5G using 5G connectivity for esports. These demos highlighted the importance of allowing users to take control of the viewing experience. Keeping

with this theme, Microsoft announced the eagerly anticipated HoloLens 2. The significantly improved mixed reality device includes new features to better interact with holograms (hand and eye tracking). The device will cost $3,500 at launch and is initially targeted at enterprises in light of the demos shown during the Sunday keynote. It is apparent that all of these and future devices connected to the network will generate vast amounts of data. The need to deliver these rich bandwidth hungry applications efficiently in real time will require telcos to deploy edge computing. This in turn brings one of the other benefits of 5G, low latency. Microsoft’s CEO Satya Nadella along with others pointed towards the edge as one of the most powerful developments in the evolution of mobile networks. In essence, edge computing redefines the way content is cached and distributed, closer to the edge of the network and thus the user. Ultimately this will drive the emergence of new applications and services. Naturally games and video will hugely benefit as well as other bandwidth hungry applications. Foldable devices grabbed a lot of attention; in particular the Huawei Mate X and Samsung’s Galaxy Fold. This new category is providing renewed impetus among handset manufacturers who are struggling to differentiate. While it is early days, content creators should be excited about the potential to engage with users in a different way. Overall, there was a sense of realism among telcos that they need to transform themselves, which in turn will open up new experiences for consumers and businesses. While the promise of 5G allows users to download more content at lightning speeds with low latency, the business model still remains unproven. With this in mind expect a flurry of partnerships with numerous companies across many verticals to realise the vision of 5G. This will involve a smart converged network connecting things driven by voice, powered by AI and the Cloud, and delivered by 5G and fibre. n