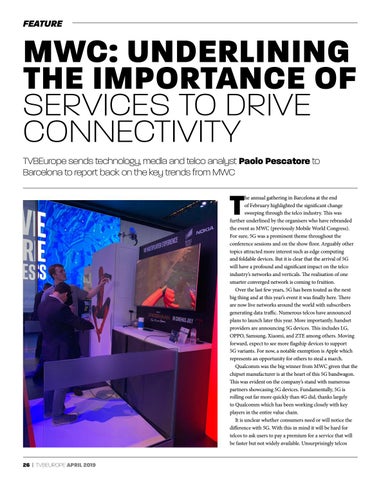 MWC: UNDERLINING THE IMPORTANCE OF SERVICES TO DRIVE CONNECTIVITY TVBEurope sends technology, media and telco analyst Paolo Pescatore to Barcelona to report back on the key trends from MWC

he annual gathering in Barcelona at the end of February highlighted the significant change sweeping through the telco industry. This was further underlined by the organisers who have rebranded the event as MWC (previously Mobile World Congress). For sure, 5G was a prominent theme throughout the conference sessions and on the show floor. Arguably other topics attracted more interest such as edge computing and foldable devices. But it is clear that the arrival of 5G will have a profound and significant impact on the telco industry’s networks and verticals. The realisation of one smarter converged network is coming to fruition. Over the last few years, 5G has been touted as the next big thing and at this year’s event it was finally here. There are now live networks around the world with subscribers generating data traffic. Numerous telcos have announced plans to launch later this year. More importantly, handset providers are announcing 5G devices. This includes LG, OPPO, Samsung, Xiaomi, and ZTE among others. Moving forward, expect to see more flagship devices to support 5G variants. For now, a notable exemption is Apple which represents an opportunity for others to steal a march. Qualcomm was the big winner from MWC given that the chipset manufacturer is at the heart of this 5G bandwagon. This was evident on the company’s stand with numerous partners showcasing 5G devices. Fundamentally, 5G is rolling out far more quickly than 4G did, thanks largely to Qualcomm which has been working closely with key players in the entire value chain. It is unclear whether consumers need or will notice the difference with 5G. With this in mind it will be hard for telcos to ask users to pay a premium for a service that will be faster but not widely available. Unsurprisingly telcos