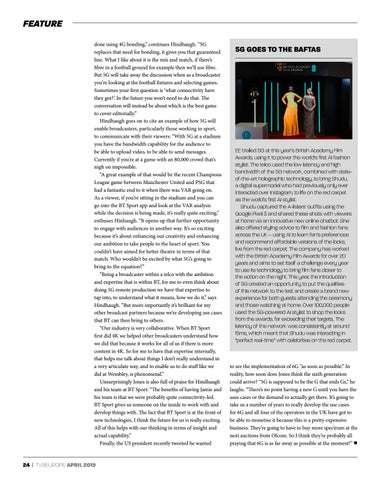 FEATURE done using 4G bonding,” continues Hindhaugh. “5G replaces that need for bonding, it gives you that guaranteed line. What I like about it is the mix and match, if there’s fibre in a football ground for example then we’ll use fibre. But 5G will take away the discussion when as a broadcaster you’re looking at the football fixtures and selecting games. Sometimes your first question is ‘what connectivity have they got?’. In the future you won’t need to do that. The conversation will instead be about which is the best game to cover editorially.” Hindhaugh goes on to cite an example of how 5G will enable broadcasters, particularly those working in sport, to communicate with their viewers: “With 5G at a stadium you have the bandwidth capability for the audience to be able to upload video, to be able to send messages. Currently if you’re at a game with an 80,000 crowd that’s nigh on impossible. “A great example of that would be the recent Champions League game between Manchester United and PSG that had a fantastic end to it when there was VAR going on. As a viewer, if you’re sitting in the stadium and you can go into the BT Sport app and look at the VAR analysis while the decision is being made, it’s really quite exciting,” enthuses Hinhaugh. “It opens up that further opportunity to engage with audiences in another way. It’s so exciting because it’s about enhancing our creativity and enhancing our ambition to take people to the heart of sport. You couldn’t have aimed for better theatre in terms of that match. Who wouldn’t be excited by what 5G’s going to bring to the equation?” “Being a broadcaster within a telco with the ambition and expertise that is within BT, for me to even think about doing 5G remote production we have that expertise to tap into, to understand what it means, how we do it,” says Hindhaugh. “But more importantly it’s brilliant for my other broadcast partners because we’re developing use cases that BT can then bring to others. “Our industry is very collaborative. When BT Sport first did 4K we helped other broadcasters understand how we did that because it works for all of us if there is more content in 4K. So for me to have that expertise internally, that helps me talk about things I don’t really understand in a very articulate way, and to enable us to do stuff like we did at Wembley, is phenomenal.” Unsurprisingly Jones is also full of praise for Hindhaugh and his team at BT Sport: “The benefits of having Jamie and his team is that we were probably quite connectivity-led. BT Sport gives us someone on the inside to work with and develop things with. The fact that BT Sport is at the front of new technologies, I think the future for us is really exciting. All of this helps with our thinking in terms of insight and actual capability.” Finally, the US president recently tweeted he wanted

5G GOES TO THE BAFTAS

EE trialled 5G at this year’s British Academy Film Awards, using it to power the world’s first AI fashion stylist. The telco used the low latency and high bandwidth of the 5G network, combined with stateof-the-art holographic technology, to bring Shudu, a digital supermodel who had previously only ever interacted over Instagram, to life on the red carpet as the world’s first AI stylist. Shudu captured the A-listers’ outfits using the Google Pixel 3 and shared these shots with viewers at home via an innovative new online chatbot. She also offered styling advice to film and fashion fans across the UK – using AI to learn fan’s preferences and recommend affordable versions of the looks, live from the red carpet. The company has worked with the British Academy Film Awards for over 20 years and aims to set itself a challenge every year to use its technology to bring film fans closer to the action on the night. This year, the introduction of 5G created an opportunity to put the qualities of this network to the test and create a brand new experience for both guests attending the ceremony and those watching at home. Over 100,000 people used the 5G-powered AI stylist to shop the looks from the awards, far exceeding their targets.. The latency of the network was consistently at around 15ms, which meant that Shudu was interacting in “perfect real-time” with celebrities on the red carpet.

to see the implementation of 6G “as soon as possible.” In reality, how soon does Jones think the sixth generation could arrive? “5G is supposed to be the G that ends Gs,” he laughs. “There’s no point having a new G until you have the uses cases or the demand to actually get there. It’s going to take us a number of years to really develop the use cases for 6G and all four of the operators in the UK have got to be able to monetise it because this is a pretty expensive business. They’re going to have to buy more spectrum at the next auctions from Ofcom. So I think they’re probably all praying that 6G is as far away as possible at the moment!” n