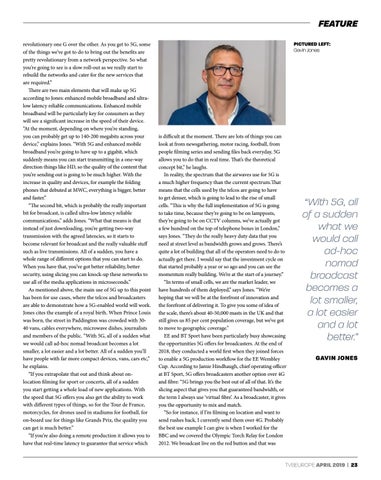 FEATURE revolutionary one G over the other. As you get to 5G, some of the things we’ve got to do to bring out the benefits are pretty revolutionary from a network perspective. So what you’re going to see is a slow roll-out as we really start to rebuild the networks and cater for the new services that are required.” There are two main elements that will make up 5G according to Jones: enhanced mobile broadband and ultralow latency reliable communications. Enhanced mobile broadband will be particularly key for consumers as they will see a significant increase in the speed of their device. “At the moment, depending on where you’re standing, you can probably get up to 140-200 megabits across your device,” explains Jones. “With 5G and enhanced mobile broadband you’re going to have up to a gigabit, which suddenly means you can start transmitting in a one-way direction things like HD, so the quality of the content that you’re sending out is going to be much higher. With the increase in quality and devices, for example the folding phones that debuted at MWC, everything is bigger, better and faster.” “The second bit, which is probably the really important bit for broadcast, is called ultra-low latency reliable communications,” adds Jones. “What that means is that instead of just downloading, you’re getting two-way transmission with the agreed latencies, so it starts to become relevant for broadcast and the really valuable stuff such as live transmissions. All of a sudden, you have a whole range of different options that you can start to do. When you have that, you’ve got better reliability, better security, using slicing you can knock-up these networks to use all of the media applications in microseconds.” As mentioned above, the main use of 5G up to this point has been for use cases, where the telcos and broadcasters are able to demonstrate how a 5G-enabled world will work. Jones cites the example of a royal birth. When Prince Louis was born, the street in Paddington was crowded with 3040 vans, cables everywhere, microwave dishes, journalists and members of the public. “With 5G, all of a sudden what we would call ad-hoc nomad broadcast becomes a lot smaller, a lot easier and a lot better. All of a sudden you’ll have people with far more compact devices, vans, cars etc,” he explains. “If you extrapolate that out and think about onlocation filming for sport or concerts, all of a sudden you start getting a whole load of new applications. With the speed that 5G offers you also get the ability to work with different types of things, so for the Tour de France, motorcycles, for drones used in stadiums for football, for on-board use for things like Grands Prix, the quality you can get is much better.” “If you’re also doing a remote production it allows you to have that real-time latency to guarantee that service which

is difficult at the moment. There are lots of things you can look at from newsgathering, motor racing, football, from people filming series and sending files back everyday, 5G allows you to do that in real time. That’s the theoretical concept bit,” he laughs. In reality, the spectrum that the airwaves use for 5G is a much higher frequency than the current spectrum.That means that the cells used by the telcos are going to have to get denser, which is going to lead to the rise of small cells. “This is why the full implementation of 5G is going to take time, because they’re going to be on lampposts, they’re going to be on CCTV columns, we’ve actually got a few hundred on the top of telephone boxes in London,” says Jones. “They do the really heavy duty data that you need at street level as bandwidth grows and grows. There’s quite a lot of building that all of the operators need to do to actually get there. I would say that the investment cycle on that started probably a year or so ago and you can see the momentum really building. We’re at the start of a journey.” “In terms of small cells, we are the market leader, we have hundreds of them deployed,” says Jones. “We’re hoping that we will be at the forefront of innovation and the forefront of delivering it. To give you some of idea of the scale, there’s about 40-50,000 masts in the UK and that still gives us 85 per cent population coverage, but we’ve got to move to geographic coverage.” EE and BT Sport have been particularly busy showcasing the opportunities 5G offers for broadcasters. At the end of 2018, they conducted a world first when they joined forces to enable a 5G production workflow for the EE Wembley Cup. According to Jamie Hindhaugh, chief operating officer at BT Sport, 5G offers broadcasters another option over 4G and fibre: “5G brings you the best out of all of that. It’s the slicing aspect that gives you that guaranteed bandwidth, or the term I always use ‘virtual fibre’. As a broadcaster, it gives you the opportunity to mix and match. “So for instance, if I’m filming on location and want to send rushes back, I currently send them over 4G. Probably the best use example I can give is when I worked for the BBC and we covered the Olympic Torch Relay for London 2012. We broadcast live on the red button and that was

“With 5G, all of a sudden what we would call ad-hoc nomad broadcast becomes a lot smaller, a lot easier and a lot better.” GAVIN JONES