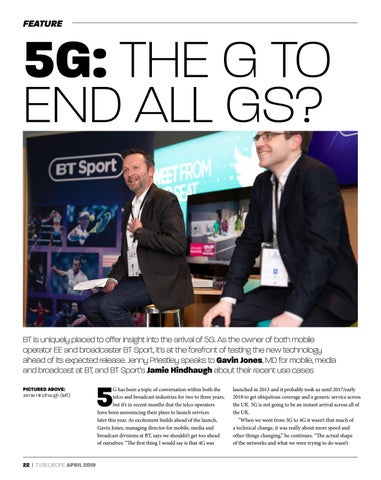 BT is uniquely placed to offer insight into the arrival of 5G. As the owner of both mobile operator EE and broadcaster BT Sport, it’s at the forefront of testing the new technology ahead of its expected release. Jenny Priestley speaks to Gavin Jones, MD for mobile, media and broadcast at BT, and BT Sport’s Jamie Hindhaugh about their recent use cases PICTURED ABOVE: Jamie Hindhaugh (left)

G has been a topic of conversation within both the telco and broadcast industries for two to three years, but it’s in recent months that the telco operators have been announcing their plans to launch services later this year. As excitement builds ahead of the launch, Gavin Jones, managing director for mobile, media and broadcast divisions at BT, says we shouldn’t get too ahead of ourselves: “The first thing I would say is that 4G was

launched in 2013 and it probably took us until 2017/early 2018 to get ubiquitous coverage and a generic service across the UK. 5G is not going to be an instant arrival across all of the UK. “When we went from 3G to 4G it wasn’t that much of a technical change, it was really about more speed and other things changing,” he continues. “The actual shape of the networks and what we were trying to do wasn’t