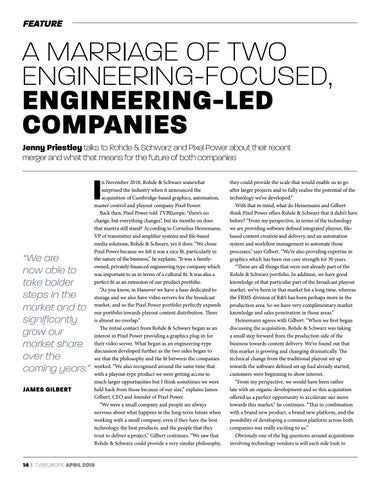 A MARRIAGE OF TWO ENGINEERING-FOCUSED, ENGINEERING-LED COMPANIES Jenny Priestley talks to Rohde & Schwarz and Pixel Power about their recent merger and what that means for the future of both companies

I “We are now able to take bolder steps in the market and to significantly grow our market share over the coming years.” JAMES GILBERT

n November 2018, Rohde & Schwarz somewhat surprised the industry when it announced the acquisition of Cambridge-based graphics, automation, master control and playout company Pixel Power. Back then, Pixel Power told TVBEurope, “there’s no change, but everything changes”, but six months on does that mantra still stand? According to Cornelius Heinemann, VP of transmitter and amplifier systems and file-based media solutions, Rohde & Schwarz, yes it does: “We chose Pixel Power because we felt it was a nice fit, particularly in the nature of the business,” he explains. “It was a familyowned, privately financed engineering type company which was important to us in terms of a cultural fit. It was also a perfect fit as an extension of our product portfolio. “As you know, in Hanover we have a base dedicated to storage and we also have video servers for the broadcast market, and so the Pixel Power portfolio perfectly expands our portfolio towards playout content distribution. There is almost no overlap.” The initial contact from Rohde & Schwarz began as an interest in Pixel Power providing a graphics plug-in for their video server. What began as an engineering-type discussion developed further as the two sides began to see that the philosophy and the fit between the companies worked. “We also recognised around the same time that with a playout-type product we were getting access to much larger opportunities but I think sometimes we were held back from those because of our size,” explains James Gilbert, CEO and founder of Pixel Power. “We were a small company and people are always nervous about what happens in the long-term future when working with a small company, even if they have the best technology, the best products, and the people that they trust to deliver a project,” Gilbert continues. “We saw that Rohde & Schwarz could provide a very similar philosophy,

they could provide the scale that would enable us to go after larger projects and to fully realise the potential of the technology we’ve developed.” With that in mind, what do Heinemann and Gilbert think Pixel Power offers Rohde & Schwarz that it didn’t have before? “From my perspective, in terms of the technology we are providing software defined integrated playout, filebased content creation and delivery, and an automation system and workflow management to automate those processes,” says Gilbert. “We’re also providing expertise in graphics which has been our core strength for 30 years. “These are all things that were not already part of the Rohde & Schwarz portfolio. In addition, we have good knowledge of that particular part of the broadcast playout market, we’ve been in that market for a long time, whereas the FBMS division of R&S has been perhaps more in the production area. So we have very complimentary market knowledge and sales penetration in those areas.” Heinemann agrees with Gilbert: “When we first began discussing the acquisition, Rohde & Schwarz was taking a small step forward from the production side of the business towards content delivery. We’ve found out that this market is growing and changing dramatically. The technical change from the traditional playout set up towards the software defined set up had already started, customers were beginning to show interest. “From my perspective, we would have been rather late with an organic development and so this acquisition offered us a perfect opportunity to accelerate our move towards this market,” he continues. “This in combination with a brand new product, a brand new platform, and the possibility of developing a common platform across both companies was really exciting to us.” Obviously one of the big questions around acquisitions involving technology vendors is will each side look to