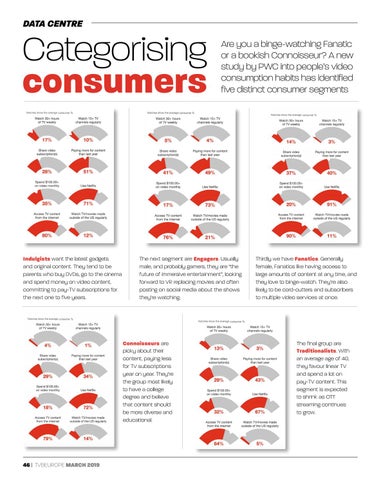 Indulgists want the latest gadgets and original content. They tend to be parents who buy DVDs, go to the cinema and spend money on video content, committing to pay-TV subscriptions for the next one to five years.

The next segment are Engagers. Usually male, and probably gamers, they are “the future of immersive entertainment”, looking forward to VR replacing movies and often posting on social media about the shows they’re watching.

Connoisseurs are picky about their content, paying less for TV subscriptions year on year. They’re the group most likely to have a college degree and believe that content should be more diverse and educational.

Are you a binge-watching Fanatic or a bookish Connoisseur? A new study by PWC into people’s video consumption habits has identified five distinct consumer segments

Thirdly we have Fanatics. Generally female, Fanatics like having access to large amounts of content at any time, and they love to binge-watch. They’re also likely to be cord-cutters and subscribers to multiple video services at once.

The final group are Traditionalists. With an average age of 40, they favour linear TV and spend a lot on pay-TV content. This segment is expected to shrink as OTT streaming continues to grow.