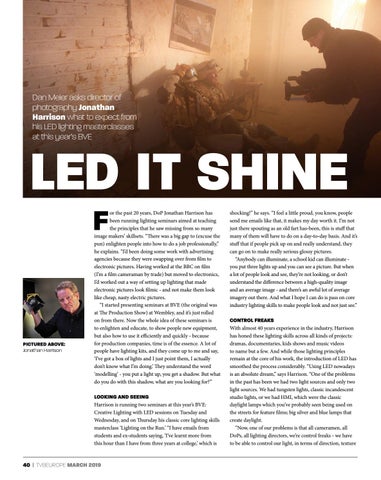 or the past 20 years, DoP Jonathan Harrison has been running lighting seminars aimed at teaching the principles that he saw missing from so many image makers’ skillsets. “There was a big gap to (excuse the pun) enlighten people into how to do a job professionally,” he explains. “I’d been doing some work with advertising agencies because they were swapping over from film to electronic pictures. Having worked at the BBC on film (I’m a film cameraman by trade) but moved to electronics, I’d worked out a way of setting up lighting that made electronic pictures look filmic - and not make them look like cheap, nasty electric pictures. “I started presenting seminars at BVE (the original was at The Production Show) at Wembley, and it’s just rolled on from there. Now the whole idea of these seminars is to enlighten and educate, to show people new equipment, but also how to use it efficiently and quickly - because for production companies, time is of the essence. A lot of people have lighting kits, and they come up to me and say, ‘I’ve got a box of lights and I just point them, I actually don’t know what I’m doing.’ They understand the word ‘modelling’ - you put a light up, you get a shadow. But what do you do with this shadow, what are you looking for?” LOOKING AND SEEING Harrison is running two seminars at this year’s BVE: Creative Lighting with LED sessions on Tuesday and Wednesday, and on Thursday his classic core lighting skills masterclass ‘Lighting on the Run.’ “I have emails from students and ex-students saying, ‘I’ve learnt more from this hour than I have from three years at college,’ which is

shocking!” he says. “I feel a little proud, you know, people send me emails like that, it makes my day worth it. I’m not just there spouting as an old fart has-been, this is stuff that many of them will have to do on a day-to-day basis. And it’s stuff that if people pick up on and really understand, they can go on to make really serious glossy pictures. “Anybody can illuminate, a school kid can illuminate you put three lights up and you can see a picture. But when a lot of people look and see, they’re not looking, or don’t understand the difference between a high-quality image and an average image - and there’s an awful lot of average imagery out there. And what I hope I can do is pass on core industry lighting skills to make people look and not just see.” CONTROL FREAKS With almost 40 years experience in the industry, Harrison has honed these lighting skills across all kinds of projects: dramas, documentaries, kids shows and music videos to name but a few. And while those lighting principles remain at the core of his work, the introduction of LED has smoothed the process considerably. “Using LED nowadays is an absolute dream,” says Harrison. “One of the problems in the past has been we had two light sources and only two light sources. We had tungsten lights, classic incandescent studio lights, or we had HMI, which were the classic daylight lamps which you’ve probably seen being used on the streets for feature films; big silver and blue lamps that create daylight. “Now, one of our problems is that all cameramen, all DoPs, all lighting directors, we’re control freaks - we have to be able to control our light, in terms of direction, texture