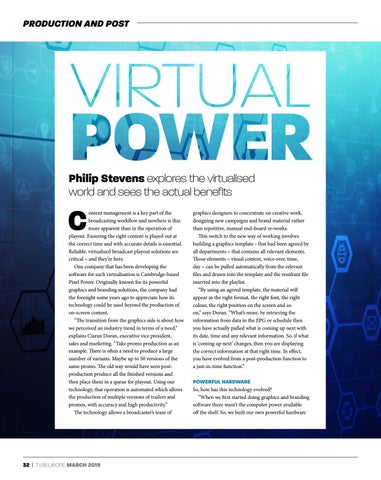 ontent management is a key part of the broadcasting workflow and nowhere is this more apparent than in the operation of playout. Ensuring the right content is played out at the correct time and with accurate details is essential. Reliable, virtualised broadcast playout solutions are critical – and they’re here. One company that has been developing the software for such virtualisation is Cambridge-based Pixel Power. Originally known for its powerful graphics and branding solutions, the company had the foresight some years ago to appreciate how its technology could be used beyond the production of on-screen content. “The transition from the graphics side is about how we perceived an industry trend in terms of a need,” explains Ciaran Doran, executive vice president, sales and marketing. “Take promo production as an example. There is often a need to produce a large number of variants. Maybe up to 50 versions of the same promo. The old way would have seen postproduction produce all the finished versions and then place them in a queue for playout. Using our technology, that operation is automated which allows the production of multiple versions of trailers and promos, with accuracy and high productivity.” The technology allows a broadcaster’s team of

graphics designers to concentrate on creative work, designing new campaigns and brand material rather than repetitive, manual end-board re-works. This switch to the new way of working involves building a graphics template - that had been agreed by all departments – that contains all relevant elements. Those elements – visual content, voice over, time, day – can be pulled automatically from the relevant files and drawn into the template and the resultant file inserted into the playlist. “By using an agreed template, the material will appear in the right format, the right font, the right colour, the right position on the screen and so on,” says Doran. “What’s more, by retrieving the information from data in the EPG or schedule then you have actually pulled what is coming up next with its date, time and any relevant information. So, if what is ‘coming up next’ changes, then you are displaying the correct information at that right time. In effect, you have evolved from a post-production function to a just-in-time function.” POWERFUL HARDWARE So, how has this technology evolved? “When we first started doing graphics and branding software there wasn’t the computer power available off the shelf. So, we built our own powerful hardware