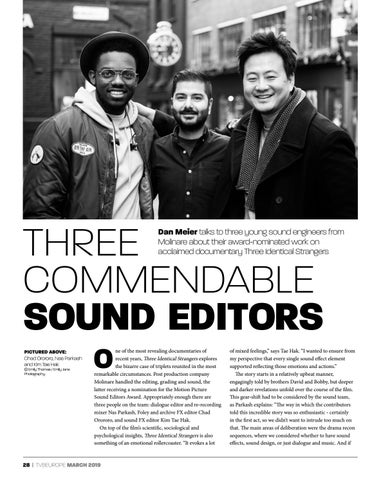 ne of the most revealing documentaries of recent years, Three Identical Strangers explores the bizarre case of triplets reunited in the most remarkable circumstances. Post production company Molinare handled the editing, grading and sound, the latter receiving a nomination for the Motion Picture Sound Editors Award. Appropriately enough there are three people on the team: dialogue editor and re-recording mixer Nas Parkash, Foley and archive FX editor Chad Orororo, and sound FX editor Kim Tae Hak. On top of the film’s scientific, sociological and psychological insights, Three Identical Strangers is also something of an emotional rollercoaster. “It evokes a lot

of mixed feelings,” says Tae Hak. “I wanted to ensure from my perspective that every single sound effect element supported reflecting those emotions and actions.” The story starts in a relatively upbeat manner, engagingly told by brothers David and Bobby, but deeper and darker revelations unfold over the course of the film. This gear-shift had to be considered by the sound team, as Parkash explains: “The way in which the contributors told this incredible story was so enthusiastic - certainly in the first act, so we didn’t want to intrude too much on that. The main areas of deliberation were the drama recon sequences, where we considered whether to have sound effects, sound design, or just dialogue and music. And if