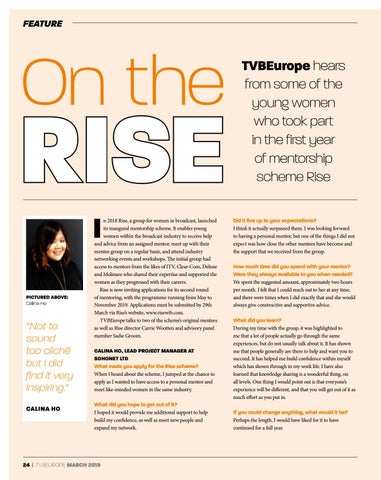 RISE I PICTURED ABOVE: Calina Ho

“Not to sound too cliché but I did find it very inspiring.” CALINA HO

n 2018 Rise, a group for women in broadcast, launched its inaugural mentorship scheme. It enables young women within the broadcast industry to receive help and advice from an assigned mentor, meet up with their mentee group on a regular basis, and attend industry networking events and workshops. The initial group had access to mentors from the likes of ITV, Clear-Com, Deluxe and Molinare who shared their expertise and supported the women as they progressed with their careers. Rise is now inviting applications for its second round of mentoring, with the programme running from May to November 2019. Applications must be submitted by 29th March via Rise’s website, www.risewib.com. TVBEurope talks to two of the scheme’s original mentees as well as Rise director Carrie Wootten and advisory panel member Sadie Groom. CALINA HO, LEAD PROJECT MANAGER AT SOHONET LTD What made you apply for the Rise scheme? When I heard about the scheme, I jumped at the chance to apply as I wanted to have access to a personal mentor and meet like-minded women in the same industry. What did you hope to get out of it? I hoped it would provide me additional support to help build my confidence, as well as meet new people and expand my network.

TVBEurope hears from some of the young women who took part in the first year of mentorship scheme Rise Did it live up to your expectations? I think it actually surpassed them. I was looking forward to having a personal mentor, but one of the things I did not expect was how close the other mentees have become and the support that we received from the group. How much time did you spend with your mentor? Were they always available to you when needed? We spent the suggested amount, approximately two hours per month. I felt that I could reach out to her at any time, and there were times when I did exactly that and she would always give constructive and supportive advice. What did you learn? During my time with the group, it was highlighted to me that a lot of people actually go through the same experiences, but do not usually talk about it. It has shown me that people generally are there to help and want you to succeed. It has helped me build confidence within myself which has shown through in my work life. I have also learned that knowledge sharing is a wonderful thing, on all levels. One thing I would point out is that everyone’s experience will be different, and that you will get out of it as much effort as you put in. If you could change anything, what would it be? Perhaps the length, I would have liked for it to have continued for a full year.