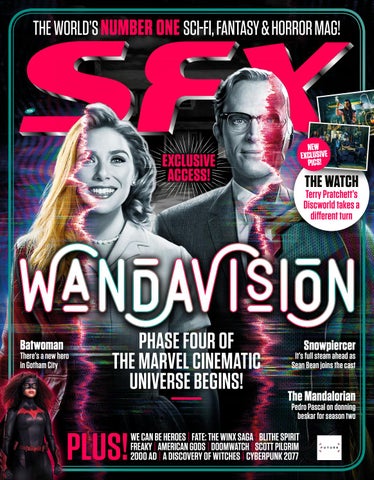 It’s full steam ahead as Sean Bean joins the cast

Phase Four of Marvel’s Cinematic Universe begins – slightly later than planned – with the surreal and secrecyshrouded Disney+ series WandaVision. SFX speaks to its showrunner and stars

A DECADE IN THE MAKING,

IS FINALLY HERE… SFX MEETS THE STARS AND SHOWRUNNER OF BBC AMERICA’S LONG-AWAITED NEW SHOW INSPIRED BY THE NOVELS OF SIR TERRY PRATCHETT WORDS: WILL SALMON

WHAT DO YOU DO WHEN THE ACTOR PLAYING THE TITLE ROLE LEAVES YOUR SHOW? CAROLINE DRIES EXPLAINS HOW

ACK IN OCTOBER 2019, WHEN THE CW’s Batwoman hit small screens as the latest series in the Arrowverse, no one expected the twists and turns audiences would weather. While the series itself offered up plenty of jaw-dropping moments for Kate Kane (Ruby Rose) and her inner circle Bat Team in Gotham City, what happened off screen proved to be just as unexpected. In May 2020, Rose announced that she and the producers had decided to part ways and that the role would be recast. A relatively rare occurrence to happen for any series already a season deep, the loss was particularly devastating to the show’s narrative because Rose’s Kate Kane was central in connecting all of the villains, ensemble characters and familial intrigue. Showrunner Caroline Dries admits to SFX in a call from her Los Angeles office that looking to draft a second season anew was, therefore, a pretty overwhelming task. “It’s just the lead of your show, and the show is called Batwoman,” she sighs resignedly.

But using the character as inspiration, Dries rolled up her sleeves and got to work fixing the problem. “My number one concern and challenge, as the mind behind it all, was to be in the audience’s point of view through this process,” Dries explains. “The audience is going through the same thing I’m going through, which is, ‘This is a devastating blow’. So how can we all be on the same page about how we’re feeling about this new character? I really loved Kate but was like, ‘Okay, we did that. Now, what’s the opposite of that?’” Looking outside of the bubble of the Kane family’s circle of influence, Dries says she asked herself some key questions. “I asked, ‘Who is somebody who wasn’t born into privilege? Who didn’t get her choice of schools to go to? Who could just leave college if she felt the need to and be okay? Who can just not work and do whatever job they want to do, and wait around for inspiration to strike?” she jokes. “And it was really important to create a character who was, of course, interesting, bold, powerful, worthy of being that woman, but also really likeable

WAS AT A PRE-SCREENING OF SHAUN OF THE Dead and two of the film’s producers came up to me and said, ‘We have your next movie’,” remembers director Edgar Wright. “They had the rights to this new comic book and thought it was right up my alley – they said it was like a cross between John Hughes and Kill Bill.” It’s been a decade since Wright crossed paths with Scott Pilgrim, the slacker hero of Canadian cartoonist Bryan Lee O’Malley’s graphic novel series, which follows a guy forced to battle his new girlfriend’s seven evil exes. The British director behind cult series Spaced had already taken a bite out of the big screen with 2004’s rom-zom-com, swiftly followed by 2007’s police actioner Hot Fuzz. However, with a new decade looming, he was keen to move into something more ambitious.

“I loved the premise, Bryan’s artwork and his way of writing young characters and their dialogue,” Wright tells SFX, as Scott Pilgrim Vs The World turns 10. “There was also this overriding idea that was in some of my other work: of characters relating to their own emotional struggles through the pop culture they consume,” he adds. “Scott’s playing his life like it’s a videogame, and ultimately has to learn that you can’t treat people like they’re shiny objects on your solipsistic quest. That really appealed to me.” Throw into the mix O’Malley’s kinetic storytelling and Scott Pilgrim felt like the perfect material to help the director make the leap to Hollywood. “I felt like I needed to prove myself beyond Simon [Pegg] and Nick [Frost] and do something without them,” reveals Wright. “Scott gave me the opportunity to take some of the magical realism that was in Spaced and bring it to the big screen in a different

CELEBRATED ITS 50TH ANNIVERSARY THIS YEAR, BUT THE MATTER MORE THAN EVER. SPEAKING IN 1988, CO-CREATOR GERRY DAVIS REVEALED