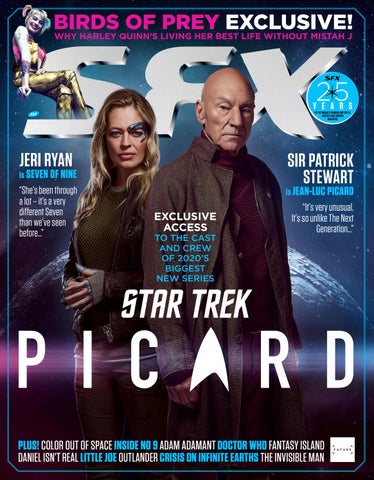 Y E A R S OF THE WORLD’S NUMBER ONE SCI-FI, FANTASY AND HORROR MAGAZINE

is SEVEN OF NINE

“It’s very unusual. It’s so unlike The Next Generation…”

PLUS! COLOR OUT OF SPACE INSIDE NO 9 ADAM ADAMANT DOCTOR WHO FANTASY ISLAND DANIEL ISN’T REAL LITTLE JOE OUTLANDER CRISIS ON INFINITE EARTHS THE INVISIBLE MAN

“I have no desire to have fun.”

tar Trek, as I’ve said before, is what brought me to the world of SFX. Way, way back in the days when a group of sci-fi fans in Edinburgh watched imported video cassettes of new episodes – including the Voyager pilot in fancy NTSC black and white conversion, no less – I picked up issue one of this very magazine while on my way to a Star Trek local group meeting. A quarter of a century later we’re all still going strong, thankfully, and my love for both Star Trek and SFX is bigger than ever. I’ll admit that Enterprise didn’t really hold my attention at the time, but my love for Voyager has never wavered – so I genuinely lost any attempt at “cool” I would have had when the Picard trailer aired at SDCC last year and it was revealed that Seven Of Nine was returning. I actually screamed out loud, and I wasn’t alone – the atmosphere in Hall H was incredible. I think Discovery is absolutely fantastic – and oh boy, I can’t wait for season three – but I’ve definitely longed for further adventures in the timeline of The Next Generation, Deep Space Nine and Voyager. To say I’m excited for Picard is an understatement. To say I’m excited to have Sir Patrick Stewart and (honourable Dame) Jeri Ryan gracing the cover in our 25th anniversary year is a huge understatement – I was honoured that SFX was the only sci-fi magazine they officially spoke to. So it’ll come as little surprise that we’ve boldly gone big on the latest chapter in the Star Trek universe. Now… engage!

ALEX KURTZMAN HAS DONE A GREAT MANY THINGS SINCE BECOMING EXECUTIVE

F L Y I N G F R E E MARGOT ROBBIE BRINGS HARLEY QUINN BACK TO CINEMAS â&#x20AC;&#x201C; WITH SOME FRIENDS. SFX ROUNDS UP THE BIRDS OF PREY FOR A CHAT

BRINGS THE MINDSPLINTERING TERROR OF HP LOVECRAFT TO THE SCREEN. “THE ONLY WAY OUT IS DEATH OR MADNESS. OR BOTH!” DIRECTOR RICHARD STANLEY TELLS SFX WORDS: NICK SETCHFIELD

The Joker is many things, but he is never definitive. For every perfectly cast Jack Nicholson there’s an Oscar-winning Heath Ledger. And just as the character cackles his way through a multiplicity of origin stories, refusing to be nailed down by anything so boring as canon, so the actors keep coming, ready for a shot at the chalk-faced Hamlet of comic book movies. An achingly gaunt Joaquin Phoenix takes his turn in Todd Phillips’s Joker. From the moment the retro Warner Bros logo fills the screen, it’s obvious this film stands apart from modern superhero cinema. It’s indebted instead to the grime and fractured psyches of Martin Scorsese’s ’70s output – Taxi Driver is a blatant reference point – where graffitismeared trains rattle through the city’s bowels and lonely men aim guns in squalid apartments.

Let’s not forget The King Of Comedy, too…

Phoenix is Arthur Fleck, a new identity for the Joker, unseen in the comics. A rent-a-clown who dreams of a stand-up career, he’s a tortured, crumbling soul, clutching a pathetic Everything Must Go sign that clearly points to the last scraps of his sanity. All pained smile and Victorian pallbearer’s face, Phoenix inhabits Arthur through a remarkable physical performance, mixing klutziness with flashes of weird elegance and grace. Shirtless, his ribs seem to blade through his flesh, as if the nascent Joker is some malevolent skeleton, impatient to burst free. That’s the ever-ticking time bomb here, the tension between this wounded, creepy but oddly likable innocent and what we know he will become. Phillips’s film ignores the familiar comic book lore of the skin-bleaching acid dip, preferring to tease its Joker in increments, moment by moment – a smile, a murder, a dance – until the Clown Prince arrives, fully formed, live on prime time and facing Robert De Niro as a disdainful chat show host. The final transformation is fascinating. It plays as both a tragedy and a liberation for Arthur. Phoenix changes his entire body

“Inspirational” quotes tend to have this effect. language; he’s poised and cigarette-louche on the chat show sofa, slinky and swaggering as he walks. The greasepaint make-up is worn as his true face. Arthur has finally surrendered himself to the DC Comics icon, and the icon makes him strong – immortal, even, given he now shrugs off a surely bone-smashing collision with a taxi. The movie also plays with the Batman myth in fascinating ways. One electric moment has a red-nosed Arthur meet Bruce Wayne as a boy, a scene that echoes with the urban folklore of

This film stands apart from modern superhero cinema predator clowns and so much more besides. Arthur performs tricks through the gates of Wayne Manor, and as he leans in to touch the boy’s face he’s framed by the railings, just like the prison or

Four Easter eggs you may not have spotted… DEBRA KANE

T  he name badge of Arthur’s social worker reveals her identity: it’s a nod to Bob Kane, the writer who devised the Joker. A social worker called Debra Kane also appears in the 1995 novel Batman: The Ultimate Evil.

T  he comedy club’s name nods to the monicker that serial killer John Wayne Gacy used when performing as a clown. Todd Phillips has history here: to help finance his 1993 documentary about punk rocker GG Allin, he got Gacy – a friend of Allin’s – to paint poster art, and sold prints of it.

asylum bars that will one day divide these two eternal enemies. Elsewhere Thomas Wayne, Bruce’s father, is reimagined as a less than sympathetic onepercenter, distrustful of men in masks – oh, the irony – but capable of delivering a righteous fist to the future Joker’s face. Must be something in the genes. It’s a film with weight and space and texture, a character study that’s unafraid to take its time as it unravels its protagonist. It’s beautifully crafted, too, from the impeccable cinematography that brightens its colours even as

Arthur’s world darkens, to the sympathetic soundtrack of mournful cellos and nervetightening percussion. Very much an outlier in the hyperkinetic realm of screen superheroes, it remains to be seen what its legacy will be; Phillips and Phoenix insist there will be no sequels, no cash-ins, but its influence will undoubtedly be felt. The definitive Joker, then? Someone’s laughing at the very idea… Extras “Joker: Vision And Fury” (22 minutes) is a thoughtful look at the creative choices behind the movie, with particular insight into

the origin of Arthur’s bathroom dance and Joaquin Phoenix’s starvation diet. There’s also a minute’s worth of Phoenix’s camera tests and, intriguingly, a set of alternative takes (three minutes) from Arthur’s entrance onto the Murray Franklin show, demoing the restless talent of the film’s star in mere seconds of screen time. You also get a montage of set photos (three minutes). The DVD version just has Arthur’s entrance outtakes, however. Nick Setchfield Joaquin Phoenix says his inspirations included Katharine Hepburn and Rocky Horror’s Frank N Furter.

Z  orro, The Gay Blade is screening at the cinema which the Waynes visit, and posters for Excalibur can also be glimpsed. The Dark Knight Returns first established that the Waynes were watching a Zorro movie (in that, 1940’s Mark Of Zorro), while in Batman v Superman, Excalibur was the film which the family attended.