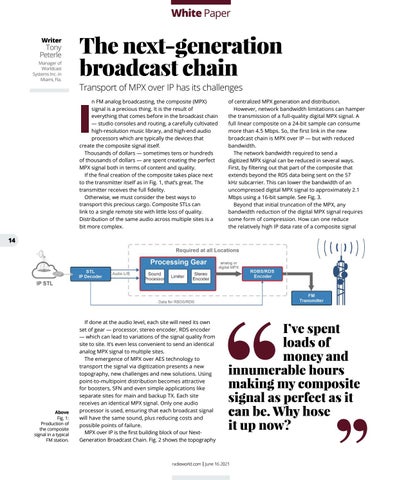 n FM analog broadcasting, the composite (MPX) signal is a precious thing. It is the result of everything that comes before in the broadcast chain — studio consoles and routing, a carefully cultivated high-resolution music library, and high-end audio processors which are typically the devices that create the composite signal itself. Thousands of dollars — sometimes tens or hundreds of thousands of dollars — are spent creating the perfect MPX signal both in terms of content and quality. If the final creation of the composite takes place next to the transmitter itself as in Fig. 1, that’s great. The transmitter receives the full fidelity. Otherwise, we must consider the best ways to transport this precious cargo. Composite STLs can link to a single remote site with little loss of quality. Distribution of the same audio across multiple sites is a bit more complex.

of centralized MPX generation and distribution. However, network bandwidth limitations can hamper the transmission of a full-quality digital MPX signal. A full linear composite on a 24-bit sample can consume more than 4.5 Mbps. So, the first link in the new broadcast chain is MPX over IP — but with reduced bandwidth. The network bandwidth required to send a digitized MPX signal can be reduced in several ways. First, by filtering out that part of the composite that extends beyond the RDS data being sent on the 57 kHz subcarrier. This can lower the bandwidth of an uncompressed digital MPX signal to approximately 2.1 Mbps using a 16-bit sample. See Fig. 3. Beyond that initial truncation of the MPX, any bandwidth reduction of the digital MPX signal requires some form of compression. How can one reduce the relatively high IP data rate of a composite signal

Above Fig. 1: Production of the composite signal in a typical FM station.

If done at the audio level, each site will need its own set of gear — processor, stereo encoder, RDS encoder — which can lead to variations of the signal quality from site to site. It’s even less convenient to send an identical analog MPX signal to multiple sites. The emergence of MPX over AES technology to transport the signal via digitization presents a new topography, new challenges and new solutions. Using point-to-multipoint distribution becomes attractive for boosters, SFN and even simple applications like separate sites for main and backup TX. Each site receives an identical MPX signal. Only one audio processor is used, ensuring that each broadcast signal will have the same sound, plus reducing costs and possible points of failure. MPX over IP is the first building block of our NextGeneration Broadcast Chain. Fig. 2 shows the topography

I’ve spent loads of money and innumerable hours making my composite signal as perfect as it can be. Why hose it up now?