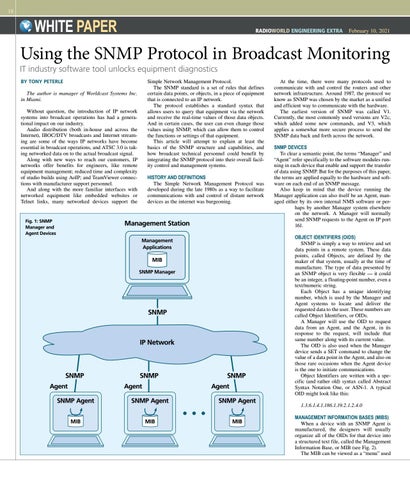 Simple Network Management Protocol. The SNMP standard is a set of rules that defines certain data points, or objects, in a piece of equipment that is connected to an IP network. The protocol establishes a standard syntax that allows users to query that equipment via the network and receive the real-time values of those data objects. And in certain cases, the user can even change those values using SNMP, which can allow them to control the functions or settings of that equipment. This article will attempt to explain at least the basics of the SNMP structure and capabilities, and how broadcast technical personnel could benefit by integrating the SNMP protocol into their overall facility control and management systems.

The author is manager of Worldcast Systems Inc. in Miami. Without question, the introduction of IP network systems into broadcast operations has had a generational impact on our industry. Audio distribution (both in-house and across the Internet), IBOC/DTV broadcasts and Internet streaming are some of the ways IP networks have become essential in broadcast operations, and ATSC 3.0 is taking networked data on to the actual broadcast signal. Along with new ways to reach our customers, IP networks offer benefits for engineers, like remote equipment management; reduced time and complexity of studio builds using AoIP; and TeamViewer connections with manufacturer support personnel. And along with the more familiar interfaces with networked equipment like embedded websites or Telnet links, many networked devices support the

HISTORY AND DEFINITIONS The Simple Network Management Protocol was developed during the late 1980s as a way to facilitate communications with and control of distant network devices as the internet was burgeoning.

At the time, there were many protocols used to communicate with and control the routers and other network infrastructure. Around 1987, the protocol we know as SNMP was chosen by the market as a unified and efficient way to communicate with the hardware. The earliest version of SNMP was called V1. Currently, the most commonly used versions are V2c, which added some new commands, and V3, which applies a somewhat more secure process to send the SNMP data back and forth across the network. SNMP DEVICES To clear a semantic point, the terms “Manager” and “Agent” refer specifically to the software modules running in each device that enable and support the transfer of data using SNMP. But for the purposes of this paper, the terms are applied equally to the hardware and software on each end of an SNMP message. Also keep in mind that the device running the Manager application can also itself be an Agent, managed either by its own internal NMS software or perhaps by another Manager system elsewhere on the network. A Manager will normally send SNMP requests to the Agent on IP port 161. OBJECT IDENTIFIERS (OIDS) SNMP is simply a way to retrieve and set data points in a remote system. These data points, called Objects, are defined by the maker of that system, usually at the time of manufacture. The type of data presented by an SNMP object is very flexible — it could be an integer, a floating-point number, even a text/numeric string. Each Object has a unique identifying number, which is used by the Manager and Agent systems to locate and deliver the requested data to the user. These numbers are called Object Identifiers, or OIDs. A Manager will use the OID to request data from an Agent, and the Agent, in its response to the request, will include that same number along with its current value. The OID is also used when the Manager device sends a SET command to change the value of a data point in the Agent, and also on those rare occasions when the Agent device is the one to initiate communications. Object Identifiers are written with a specific (and rather old) syntax called Abstract Syntax Notation One, or ASN-1. A typical OID might look like this: 1.3.6.1.4.1.186.1.19.2.1.2.4.0 MANAGEMENT INFORMATION BASES (MIBS) When a device with an SNMP Agent is manufactured, the designers will usually organize all of the OIDs for that device into a structured text file, called the Management Information Base, or MIB (see Fig. 2). The MIB can be viewed as a “menu” used