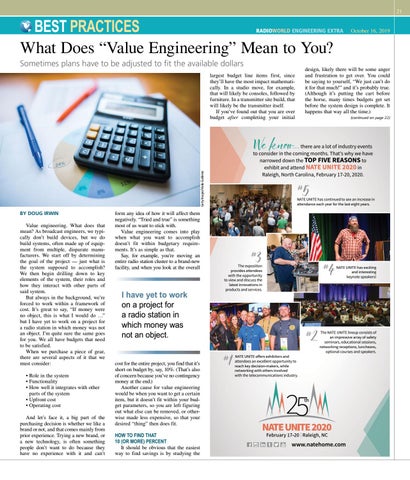 BEST PRACTICES What Does “Value Engineering” Mean to You?

Sometimes plans have to be adjusted to fit the available dollars

design, likely there will be some anger and frustration to get over. You could be saying to yourself, “We just can’t do it for that much!” and it’s probably true. (Although it’s putting the cart before the horse, many times budgets get set before the system design is complete. It happens that way all the time.)

there are a lot of industry events to consider in the coming months. That’s why we have narrowed down the TOP FIVE REASONS to exhibit and attend NATE UNITE 2020 in Raleigh, North Carolina, February 17-20, 2020.

Value engineering. What does that mean? As broadcast engineers, we typically don’t build devices, but we do build systems, often made up of equipment from multiple, disparate manufacturers. We start off by determining the goal of the project — just what is the system supposed to accomplish? We then begin drilling down to key elements of the system, their roles and how they interact with other parts of said system. But always in the background, we’re forced to work within a framework of cost. It’s great to say, “If money were no object, this is what I would do …” but I have yet to work on a project for a radio station in which money was not an object. I’m quite sure the same goes for you. We all have budgets that need to be satisfied. When we purchase a piece of gear, there are several aspects of it that we must consider: • Role in the system • Functionality • How well it integrates with other parts of the system • Upfront cost • Operating cost And let’s face it, a big part of the purchasing decision is whether we like a brand or not, and that comes mainly from prior experience. Trying a new brand, or a new technology, is often something people don’t want to do because they have no experience with it and can’t

form any idea of how it will affect them negatively. “Tried and true” is something most of us want to stick with. Value engineering comes into play when what you want to accomplish doesn’t fit within budgetary requirements. It’s as simple as that. Say, for example, you’re moving an entire radio station cluster to a brand-new facility, and when you look at the overall

I have yet to work on a project for a radio station in which money was not an object.

cost for the entire project, you find that it’s short on budget by, say, 10%. (That’s also of concern because you’ve no contingency money at the end.) Another cause for value engineering would be when you want to get a certain item, but it doesn’t fit within your budget parameters, so you are left figuring out what else can be removed, or otherwise made less expensive, so that your desired “thing” then does fit. HOW TO FIND THAT 10 (OR MORE) PERCENT It should be obvious that the easiest way to find savings is by studying the

NATE UNITE has continued to see an increase in attendance each year for the last eight years.

The exposition provides attendees with the opportunity to view and discuss the latest innovations in products and services.

#2 NATE UNITE offers exhibitors and attendees an excellent opportunity to reach key decision-makers, while networking with others involved with the telecommunications industry.