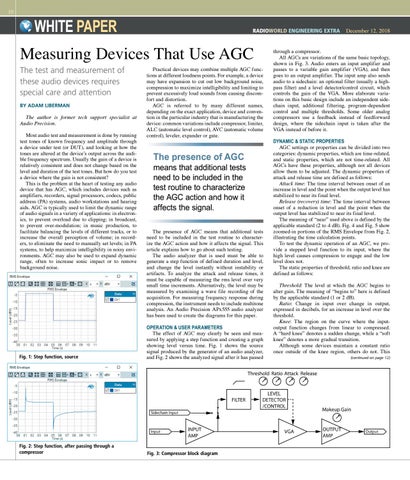 The author is former tech support specialist at Audio Precision. Most audio test and measurement is done by running test tones of known frequency and amplitude through a device under test (or DUT), and looking at how the tones are altered at the device’s output across the audible frequency spectrum. Usually the gain of a device is relatively consistent and does not change based on the level and duration of the test tones. But how do you test a device where the gain is not consistent? This is the problem at the heart of testing any audio device that has AGC, which includes devices such as amplifiers, recorders, signal processors, codecs, public address (PA) systems, audio workstations and hearing aids. AGC is typically used to limit the dynamic range of audio signals in a variety of applications: in electronics, to prevent overload due to clipping; in broadcast, to prevent over-modulation; in music production, to facilitate balancing the levels of different tracks, or to increase the overall perception of volume; in recorders, to eliminate the need to manually set levels; in PA systems, to help maximize intelligibility in noisy environments. AGC may also be used to expand dynamic range, often to increase sonic impact or to remove background noise.

Practical devices may combine multiple AGC functions at different loudness points. For example, a device may have expansion to cut out low background noise, compression to maximize intelligibility and limiting to prevent excessively loud sounds from causing discomfort and distortion. AGC is referred to by many different names, depending on the exact application, device and convention in the particular industry that is manufacturing the device: common variations include compressor, limiter, ALC (automatic level control), AVC (automatic volume control), leveler, expander or gate.

OPERATION & USER PARAMETERS The effect of AGC may clearly be seen and measured by applying a step function and creating a graph showing level versus time. Fig. 1 shows the source signal produced by the generator of an audio analyzer, and Fig. 2 shows the analyzed signal after it has passed

Fig. 2: Step function, after passing through a compressor

through a compressor. All AGCs are variations of the same basic topology, shown in Fig. 3. Audio enters an input amplifier and passes to a variable gain amplifier (VGA), and then goes to an output amplifier. The input amp also sends audio to a sidechain: an optional filter (usually a highpass filter) and a level detector/control circuit, which controls the gain of the VGA. More elaborate variations on this basic design include an independent sidechain input, additional filtering, program-dependent control and multiple thresholds. Some older analog compressors use a feedback instead of feedforward design, where the sidechain input is taken after the VGA instead of before it. DYNAMIC & STATIC PROPERTIES AGC settings or properties can be divided into two categories: dynamic properties, which are time-related, and static properties, which are not time-related. All AGCs have these properties, although not all devices allow them to be adjusted. The dynamic properties of attack and release time are defined as follows: Attack time: The time interval between onset of an increase in level and the point when the output level has stabilized to near its final level. Release (recovery) time: The time interval between onset of a reduction in level and the point when the output level has stabilized to near its final level. The meaning of “near” used above is defined by the applicable standard (2 to 4 dB). Fig. 4 and Fig. 5 show zoomed-in portions of the RMS Envelope from Fig. 2, illustrating the time calculation points. To test the dynamic operation of an AGC, we provide a stepped level function to its input, where the high level causes compression to engage and the low level does not. The static properties of threshold, ratio and knee are defined as follows: Threshold: The level at which the AGC begins to alter gain. The meaning of “begins to” here is defined by the applicable standard (1 or 2 dB). Ratio: Change in input over change in output, expressed in decibels, for an increase in level over the threshold. Knee: The region on the curve where the inputoutput function changes from linear to compressed. A “hard knee” denotes a sudden change, while a “soft knee” denotes a more gradual transition. Although some devices maintain a constant ratio once outside of the knee region, others do not. This (continued on page 12)