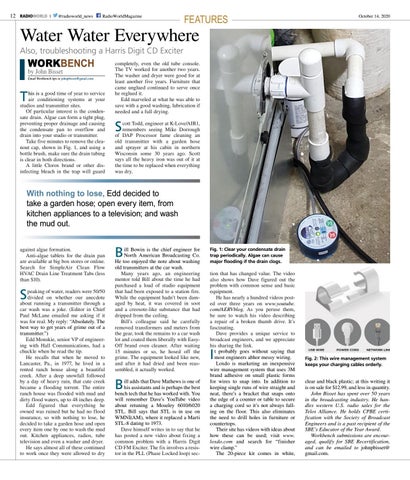 his is a good time of year to service air conditioning systems at your studios and transmitter sites. Of particular interest is the condensate drain. Algae can form a tight plug, preventing proper drainage and causing the condensate pan to overflow and drain into your studio or transmitter. Take five minutes to remove the cleanout cap, shown in Fig. 1, and using a bottle brush, make sure the drain tubing is clear in both directions. A little Clorox brand or other disinfecting bleach in the trap will guard

completely, even the old tube console. The TV worked for another two years. The washer and dryer were good for at least another five years. Furniture that came unglued continued to serve once he reglued it. Edd marveled at what he was able to save with a good washing, lubrication if needed and a full drying.

cott Todd, engineer at K-Love/AIR1, remembers seeing Mike Dorrough of DAP Processor fame cleaning an old transmitter with a garden hose and sprayer at his cabin in northern Wisconsin some 30 years ago. Scott says all the heavy iron was out of it at the time to be replaced when everything was dry.

With nothing to lose, Edd decided to take a garden hose; open every item, from kitchen appliances to a television; and wash the mud out. against algae formation. Anti-algae tablets for the drain pan are available at big box stores or online. Search for SimpleAir Clean Flow HVAC Drain Line Treatment Tabs (less than $10).

peaking of water, readers were 50/50 divided on whether our anecdote about running a transmitter through a car wash was a joke. (Editor in Chief Paul McLane emailed me asking if it was for real. My reply: “Absolutely. The best way to get years of grime out of a transmitter.”) Edd Monskie, senior VP of engineering with Hall Communications, had a chuckle when he read the tip. He recalls that when he moved to Lancaster, Pa., in 1977, he lived in a rented ranch house along a beautiful creek. After a deep snowfall followed by a day of heavy rain, that cute creek became a flooding torrent. The entire ranch house was flooded with mud and dirty flood waters, up to 48 inches deep. Edd figured that everything he owned was ruined but he had no flood insurance, so with nothing to lose, he decided to take a garden hose and open every item one by one to wash the mud out. Kitchen appliances, radios, tube television and even a washer and dryer. He says almost all of these continued to work once they were allowed to dry

ill Bowin is the chief engineer for North American Broadcasting Co. He too enjoyed the note about washing old transmitters at the car wash. Many years ago, an engineering mentor told Bill about the time he had purchased a load of studio equipment that had been exposed to a station fire. While the equipment hadn’t been damaged by heat, it was covered in soot and a creosote-like substance that had dripped from the ceiling. Bill’s colleague said he carefully removed transformers and meters from the gear, took the remains to a car wash lot and coated them liberally with EasyOff brand oven cleaner. After waiting 15 minutes or so, he hosed off the grime. The equipment looked like new, and after it had dried and been reassembled, it actually worked.

ill adds that Dave Mathews is one of his assistants and is perhaps the best bench tech that he has worked with. You will remember Dave’s YouTube video about retuning a Moseley 6010/6020 STL. Bill says that STL is in use on WMNI(AM), where it replaced a Marti STL-8 dating to 1973. Dave himself writes in to say that he has posted a new video about fixing a common problem with a Harris Digit CD FM Exciter. The fix involves a resistor in the PLL (Phase Locked loop) sec-

Fig. 1: Clear your condensate drain trap periodically. Algae can cause major flooding if the drain clogs.

tion that has changed value. The video also shows how Dave figured out the problem with common sense and basic equipment. He has nearly a hundred videos posted over three years on www.youtube. com/AERVblog. As you peruse them, be sure to watch his video describing a repair of a broken thumb drive. It’s fascinating. Dave provides a unique service to broadcast engineers, and we appreciate his sharing the link. t probably goes without saying that most engineers abhor messy wiring. Loxdo is marketing an inexpensive wire management system that uses 3M brand adhesive on small plastic forms for wires to snap into. In addition to keeping single runs of wire straight and neat, there’s a bracket that snaps onto the edge of a counter or table to secure a charging cord so it’s not always falling on the floor. This also eliminates the need to drill holes in furniture or countertops. Their site has videos with ideas about how these can be used; visit www. loxdo.com and search for “finisher wire clamp.” The 20-piece kit comes in white,

clear and black plastic; at this writing it is on sale for $12.99, and less in quantity. John Bisset has spent over 50 years in the broadcasting industry. He handles western U.S. radio sales for the Telos Alliance. He holds CPBE certification with the Society of Broadcast Engineers and is a past recipient of the SBE’s Educator of the Year Award. Workbench submissions are encouraged, qualify for SBE Recertification, and can be emailed to johnpbisset@ gmail.com.