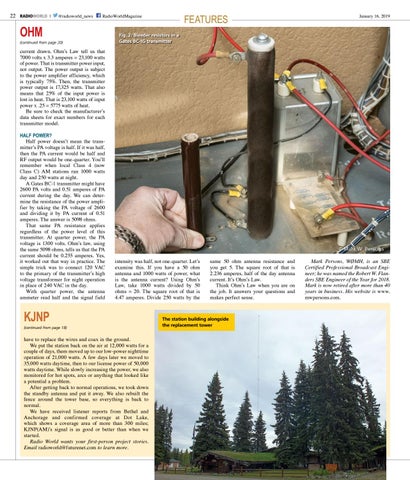 current drawn. Ohm’s Law tell us that 7000 volts x 3.3 amperes = 23,100 watts of power. That is transmitter power input, not output. The power output is subject to the power amplifier efficiency, which is typically 75%. Then, the transmitter power output is 17,325 watts. That also means that 25% of the input power is lost in heat. That is 23,100 watts of input power x .25 = 5775 watts of heat. Be sure to check the manufacturer’s data sheets for exact numbers for each transmitter model. HALF POWER? Half power doesn’t mean the transmitter’s PA voltage is half. If it was half, then the PA current would be half and RF output would be one-quarter. You’ll remember when local Class 4 (now Class C) AM stations ran 1000 watts day and 250 watts at night. A Gates BC-1 transmitter might have 2600 PA volts and 0.51 amperes of PA current during the day. We can determine the resistance of the power amplifier by taking the PA voltage of 2600 and dividing it by PA current of 0.51 amperes. The answer is 5098 ohms. That same PA resistance applies regardless of the power level of this transmitter. At quarter power, the PA voltage is 1300 volts. Ohm’s law, using the same 5098 ohms, tells us that the PA current should be 0.255 amperes. Yes, it worked out that way in practice. The simple trick was to connect 120 VAC to the primary of the transmitter’s high voltage transformer for night operation in place of 240 VAC in the day. With quarter power, the antenna ammeter read half and the signal field

have to replace the wires and coax in the ground. We put the station back on the air at 12,000 watts for a couple of days, them moved up to our low-power nighttime operation of 21,000 watts. A few days later we moved to 35,000 watts daytime, then to our license power of 50,000 watts daytime. While slowly increasing the power, we also monitored for hot spots, arcs or anything that looked like a potential a problem. After getting back to normal operations, we took down the standby antenna and put it away. We also rebuilt the fence around the tower base, so everything is back to normal. We have received listener reports from Bethel and Anchorage and confirmed coverage at Dot Lake, which shows a coverage area of more than 300 miles; KJNP(AM)’s signal is as good or better than when we started. Radio World wants your first-person project stories. Email radioworld@futurenet.com to learn more.

same 50 ohm antenna resistance and you get 5. The square root of that is 2.236 amperes, half of the day antenna current. It’s Ohm’s Law. Think Ohm’s Law when you are on the job. It answers your questions and makes perfect sense.

The station building alongside the replacement tower

Mark Persons, WØMH, is an SBE Certified Professional Broadcast Engineer; he was named the Robert W. Flanders SBE Engineer of the Year for 2018. Mark is now retired after more than 40 years in business. His website is www. mwpersons.com.