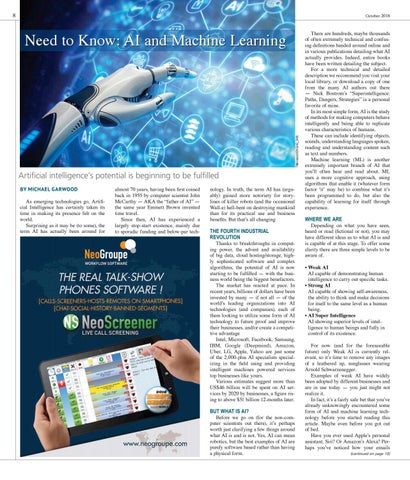 Artificial intelligence’s potential is beginning to be fulfilled BY MICHAEL GARWOOD As emerging technologies go, Artificial Intelligence has certainly taken its time in making its presence felt on the world. Surprising as it may be (to some), the term AI has actually been around for

almost 70 years, having been first coined back in 1955 by computer scientist John McCarthy — AKA the “father of AI” — the same year Emmett Brown invented time travel. Since then, AI has experienced a largely stop-start existence, mainly due to sporadic funding and below-par tech-

nology. In truth, the term AI has (arguably) gained more notoriety for storylines of killer robots (and the occasional Wall-e) hell-bent on destroying mankind than for its practical use and business benefits. But that’s all changing

Thanks to breakthroughs in computing power, the advent and availability of big data, cloud hosting/storage, highly sophisticated software and complex algorithms, the potential of AI is now starting to be fulfilled — with the business world being the biggest benefactors. The market has reacted at pace. In recent years, billions of dollars have been invested by many — if not all — of the world’s leading organizations into AI technologies (and companies), each of them looking to utilize some form of AI technology to future proof and improve their businesses, and/or create a competitive advantage Intel, Microsoft, Facebook, Samsung, IBM, Google (Deepmind), Amazon, Uber, LG, Apple, Yahoo are just some of the 2,000-plus AI specialists specializing in the field using and providing intelligent machines powered services top businesses like yours. Various estimates suggest more than US$46 billion will be spent on AI services by 2020 by businesses, a figure rising to above $51 billion 12-months later.

BUT WHAT IS AI?

Before we go on (for the non-computer scientists out there), it’s perhaps worth just clarifying a few things around what AI is and is not. Yes, AI can mean robotics, but the best examples of AI are purely software based rather than having a physical form.

There are hundreds, maybe thousands of often extremely technical and confusing definitions banded around online and in various publications detailing what AI actually provides. Indeed, entire books have been written detailing the subject. For a more technical and detailed description we recommend you visit your local library, or download a copy of one from the many AI authors out there — Nick Bostrom’s “Superintelligence: Paths, Dangers, Strategies” is a personal favorite of mine. In its most simple form, AI is the study of methods for making computers behave intelligently and being able to replicate various characteristics of humans. These can include identifying objects, sounds, understanding languages spoken, reading and understanding content such as text and numbers. Machine learning (ML) is another extremely important branch of AI that you’ll often hear and read about. ML uses a more cognitive approach, using algorithms that enable it (whatever form factor ‘it’ may be) to combine what it’s been programmed to do, but also the capability of learning for itself through experience.

Depending on what you have seen, heard or read (fictional or not), you may have different ideas as to what AI is and is capable of at this stage. To offer some clarity there are three simple levels to be aware of. • Weak AI AI capable of demonstrating human intelligence to carry out specific tasks. • Strong AI AI capable of showing self-awareness, the ability to think and make decisions for itself to the same level as a human being. • AI Super Intelligence AI showing superior levels of intelligence to human beings and fully in control of its existence. For now (and for the foreseeable future) only Weak AI is currently relevant, so it’s time to remove any images of a leathered up, sunglasses wearing Arnold Schwarzenegger. Examples of weak AI have widely been adopted by different businesses and are in use today — you just might not realize it. In fact, it’s a fairly safe bet that you’ve already unknowingly encountered some form of AI and machine learning technology before you started reading this article. Maybe even before you got out of bed. Have you ever used Apple’s personal assistant, Siri? Or Amazon’s Alexa? Perhaps you’ve noticed how your emails (continued on page 10)