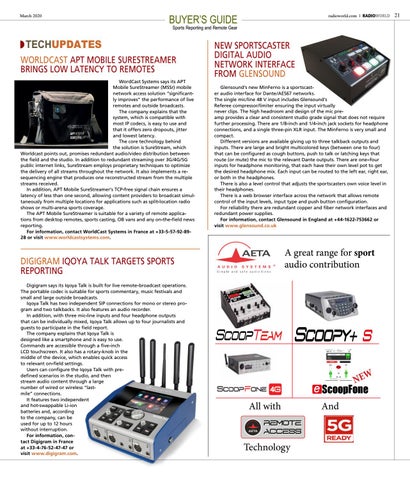 ◗TECHUPDATES WORLDCAST APT MOBILE SURESTREAMER BRINGS LOW LATENCY TO REMOTES WordCast Systems says its APT Mobile SureStreamer (MSSr) mobile network access solution “significantly improves” the performance of live remotes and outside broadcasts. The company explains that the system, which is compatible with most IP codecs, is easy to use and that it offers zero dropouts, jitter and lowest latency. The core technology behind the solution is SureStream, which Worldcast points out, promises redundant audio/video distribution between the field and the studio. In addition to redundant streaming over 3G/4G/5G public internet links, SureStream employs proprietary techniques to optimize the delivery of all streams throughout the network. It also implements a resequencing engine that produces one reconstructed stream from the multiple streams received. In addition, APT Mobile SureStreamer’s TCP-free signal chain ensures a latency of less than one second, allowing content providers to broadcast simultaneously from multiple locations for applications such as split-location radio shows or multi-arena sports coverage. The APT Mobile SureStreamer is suitable for a variety of remote applications from desktop remotes, sports casting, OB vans and any on-the-field news reporting. For information, contact WorldCast Systems in France at +33-5-57-92-8928 or visit www.worldcastsystems.com.

NEW SPORTSCASTER DIGITAL AUDIO NETWORK INTERFACE FROM GLENSOUND Glensound’s new MinFerno is a sportscaster audio interface for Dante/AES67 networks. The single mic/line 48 V input includes Glensound’s Referee compressor/limiter ensuring the input virtually never clips. The high headroom and design of the mic preamp provides a clear and consistent studio grade signal that does not require further processing. There are 1/8-inch and 1/4-inch jack sockets for headphone connections, and a single three-pin XLR input. The MinFerno is very small and compact. Different versions are available giving up to three talkback outputs and inputs. There are large and bright multicolored keys (between one to four) that can be configured as cough buttons, push to talk or latching keys that route (or mute) the mic to the relevant Dante outputs. There are one–four inputs for headphone monitoring, that each have their own level pot to get the desired headphone mix. Each input can be routed to the left ear, right ear, or both in the headphones. There is also a level control that adjusts the sportscasters own voice level in their headphones. There is a web browser interface across the network that allows remote control of the input levels, input type and push button configuration. For reliability there are redundant copper and fiber network interfaces and redundant power supplies. For information, contact Glensound in England at +44-1622-753662 or visit www.glensound.co.uk

DIGIGRAM IQOYA TALK TARGETS SPORTS REPORTING Digigram says its Iqoya Talk is built for live remote-broadcast operations. The portable codec is suitable for sports commentary, music festivals and small and large outside broadcasts. Iqoya Talk has two independent SIP connections for mono or stereo program and two talkbacks. It also features an audio recorder. In addition, with three mic-line inputs and four headphone outputs that can be individually mixed, Iqoya Talk allows up to four journalists and guests to participate in the field report. The company explains that Iqoya Talk is designed like a smartphone and is easy to use. Commands are accessible through a five-inch LCD touchscreen. It also has a rotary-knob in the middle of the device, which enables quick access to relevant on-field settings. Users can configure the Iqoya Talk with predefined scenarios in the studio, and then stream audio content through a large number of wired or wireless “lastmile” connections. It features two independent and hot-swappable Li-ion batteries and, according to the company, can be used for up to 12 hours without interruption. For information, contact Digigram in France at +33-4-76-52-47-47 or visit www.digigram.com.