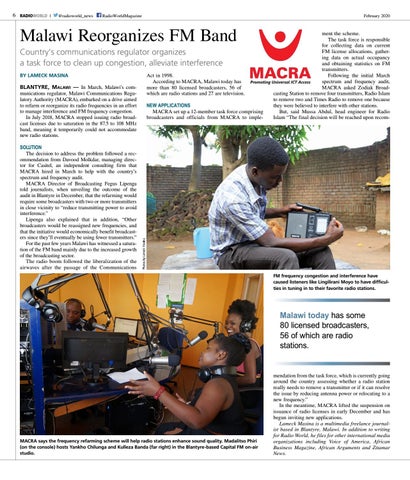 Malawi Reorganizes FM Band Country’s communications regulator organizes a task force to clean up congestion, alleviate interference Act in 1998. According to MACRA, Malawi today has more than 80 licensed broadcasters, 56 of which are radio stations and 27 are television.

munications regulator, Malawi Communications Regulatory Authority (MACRA), embarked on a drive aimed to refarm or reorganize its radio frequencies in an effort to manage interference and FM frequency congestion. In July 2018, MACRA stopped issuing radio broadcast licenses due to saturation in the 87.5 to 108 MHz band, meaning it temporarily could not accommodate new radio stations. SOLUTION The decision to address the problem followed a recommendation from Davood Molkdar, managing director for Casitel, an independent consulting firm that MACRA hired in March to help with the country’s spectrum and frequency audit. MACRA Director of Broadcasting Fegus Lipenga told journalists, when unveiling the outcome of the audit in Blantyre in December, that the refarming would require some broadcasters with two or more transmitters in close vicinity to “reduce transmitting power to avoid interference.” Lipenga also explained that in addition, “Other broadcasters would be reassigned new frequencies, and that the initiative would economically benefit broadcasters since they’ll eventually be using fewer transmitters.” For the past few years Malawi has witnessed a saturation of the FM band mainly due to the increased growth of the broadcasting sector. The radio boom followed the liberalization of the airwaves after the passage of the Communications

ment the scheme. The task force is responsible for collecting data on current FM license allocations, gathering data on actual occupancy and obtaining statistics on FM transmitters. Following the initial March spectrum and frequency audit, MACRA asked Zodiak Broadcasting Station to remove four transmitters, Radio Islam to remove two and Times Radio to remove one because they were believed to interfere with other stations. But, said Mussa Abdul, head engineer for Radio Islam “The final decision will be reached upon recom-

FM frequency congestion and interference have caused listeners like Lingilirani Moyo to have difficulties in tuning in to their favorite radio stations.

Malawi today has some 80 licensed broadcasters, 56 of which are radio stations.

mendation from the task force, which is currently going around the country assessing whether a radio station really needs to remove a transmitter or if it can resolve the issue by reducing antenna power or relocating to a new frequency.” In the meantime, MACRA lifted the suspension on issuance of radio licenses in early December and has begun inviting new applications. Lameck Masina is a multimedia freelance journalist based in Blantyre, Malawi. In addition to writing for Radio World, he files for other international media organizations including Voice of America, African Business Magazine, African Arguments and Zitamar News.