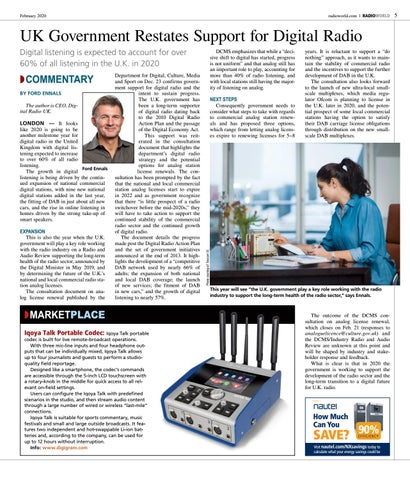 UK Government Restates Support for Digital Radio Digital listening is expected to account for over 60% of all listening in the U.K. in 2020

like 2020 is going to be another milestone year for digital radio in the United Kingdom with digital listening expected to increase to over 60% of all radio listening. Ford Ennals The growth in digital listening is being driven by the continued expansion of national commercial digital stations, with nine new national digital stations added in the last year, the fitting of DAB in just about all new cars, and the rise in online listening in homes driven by the strong take-up of smart speakers. EXPANSION This is also the year when the U.K. government will play a key role working with the radio industry on a Radio and Audio Review supporting the long-term health of the radio sector, announced by the Digital Minister in May 2019, and by determining the future of the U.K.’s national and local commercial radio station analog licenses. The consultation document on analog license renewal published by the

Department for Digital, Culture, Media and Sport on Dec. 23 confirms government support for digital radio and the intent to sustain progress. The U.K. government has been a long-term supporter of digital radio dating back to the 2010 Digital Radio Action Plan and the passage of the Digital Economy Act. This support was reiterated in the consultation document that highlights the department’s digital radio strategy and the potential options for analog station license renewals. The consultation has been prompted by the fact that the national and local commercial station analog licenses start to expire in 2022 and as government recognize that there “is little prospect of a radio switchover before the mid-2020s,” they will have to take action to support the continued stability of the commercial radio sector and the continued growth of digital radio. The document details the progress made post the Digital Radio Action Plan and the set of government initiatives announced at the end of 2013. It highlights the development of a “competitive DAB network used by nearly 66% of adults; the expansion of both national and local DAB coverage; the launch of new services; the fitment of DAB in new cars,” and the growth of digital listening to nearly 57%.

◗MARKETPLACE Iqoya Talk Portable Codec: Iqoya Talk portable codec is built for live remote-broadcast operations. With three mic-line inputs and four headphone outputs that can be individually mixed, Iqoya Talk allows up to four journalists and guests to perform a studioquality field reportage. Designed like a smartphone, the codec’s commands are accessible through the 5-inch LCD touchscreen with a rotary-knob in the middle for quick access to all relevant on-field settings. Users can configure the Iqoya Talk with predefined scenarios in the studio, and then stream audio content through a large number of wired or wireless “last-mile” connections. Iqoya Talk is suitable for sports commentary, music festivals and small and large outside broadcasts. It features two independent and hot-swappable Li-ion batteries and, according to the company, can be used for up to 12 hours without interruption. Info: www.digigram.com

NEXT STEPS Consequently government needs to consider what steps to take with regards to commercial analog station renewals and has proposed three options, which range from letting analog licenses expire to renewing licenses for 5–8

years. It is reluctant to support a “do nothing” approach, as it wants to maintain the stability of commercial radio and the incentives to support the further development of DAB in the U.K. The consultation also looks forward to the launch of new ultra-local smallscale multiplexes, which media regulator Ofcom is planning to license in the U.K. later in 2020, and the potential prospect of some local commercial stations having the option to satisfy their DAB carriage license obligations through distribution on the new smallscale DAB multiplexes.

DCMS emphasizes that while a “decisive shift to digital has started, progress is not uniform” and that analog still has an important role to play, accounting for more than 40% of radio listening, and with local stations still having the majority of listening on analog.

This year will see “the U.K. government play a key role working with the radio industry to support the long-term health of the radio sector,” says Ennals.

The outcome of the DCMS consultation on analog license renewal, which closes on Feb. 21 (responses to analoguelicence@culture.gov.uk) and the DCMS/Industry Radio and Audio Review are unknown at this point and will be shaped by industry and stakeholder response and feedback. What is clear is that in 2020 the government is working to support the development of the radio sector and the long-term transition to a digital future for U.K. radio.

How Much Can You

Visit nautel.com/NXsavings today to calculate what your energy savings could be