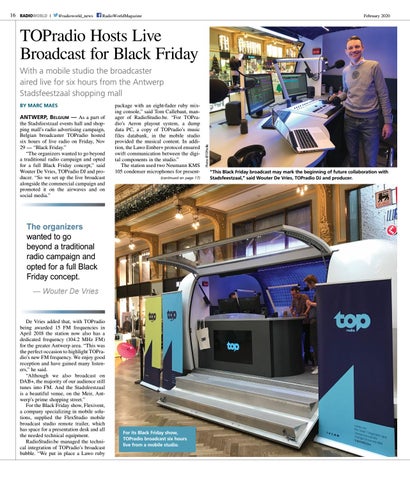 ANTWERP, Belgium — As a part of

the Stadsfeestzaal events hall and shopping mall’s radio advertising campaign, Belgian broadcaster TOPradio hosted six hours of live radio on Friday, Nov 29 — “Black Friday.” “The organizers wanted to go beyond a traditional radio campaign and opted for a full Black Friday concept,” said Wouter De Vries, TOPradio DJ and producer. “So we set up the live broadcast alongside the commercial campaign and promoted it on the airwaves and on social media.”

The organizers wanted to go beyond a traditional radio campaign and opted for a full Black Friday concept. — Wouter De Vries

De Vries added that, with TOPradio being awarded 15 FM frequencies in April 2018 the station now also has a dedicated frequency (104.2 MHz FM) for the greater Antwerp area. “This was the perfect occasion to highlight TOPradio’s new FM frequency. We enjoy good reception and have gained many listeners,” he said. “Although we also broadcast on DAB+, the majority of our audience still tunes into FM. And the Stadsfeestzaal is a beautiful venue, on the Meir, Antwerp’s prime shopping street.” For the Black Friday show, Flexivent, a company specializing in mobile solutions, supplied the FlexStudio mobile broadcast studio remote trailer, which has space for a presentation desk and all the needed technical equipment. RadioStudio.be managed the technical integration of TOPradio’s broadcast bubble. “We put in place a Lawo ruby