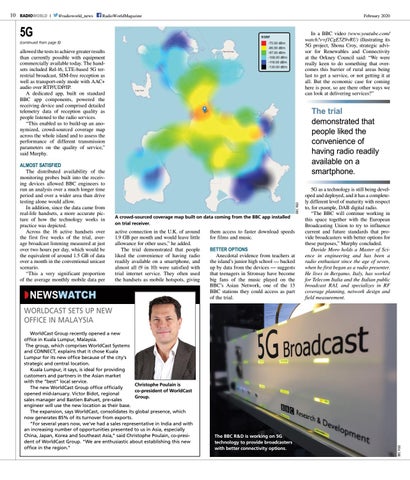 In a BBC video (www.youtube.com/ watch?v=f1CgE5Z9vRU) illustrating its 5G project, Shona Croy, strategic advisor for Renewables and Connectivity at the Orkney Council said: “We were really keen to do something that overcomes this barrier of rural areas being last to get a service, or not getting it at all. But the economic case for coming here is poor, so are there other ways we can look at delivering services?”

allowed the tests to achieve greater results than currently possible with equipment commercially available today. The handsets included Rel-16, LTE-based 5G terrestrial broadcast, SIM-free reception as well as transport-only mode with AAC+ audio over RTP/UDP/IP. A dedicated app, built on standard BBC app components, powered the receiving device and comprised detailed telemetry data of reception quality as people listened to the radio services. “This enabled us to build-up an anonymized, crowd-sourced coverage map across the whole island and to assess the performance of different transmission parameters on the quality of service,” said Murphy. ALMOST SATISFIED The distributed availability of the monitoring probes built into the receiving devices allowed BBC engineers to run an analysis over a much longer time period and over a wider area than drive testing alone would allow. In addition, since the data came from real-life handsets, a more accurate picture of how the technology works in practice was depicted. Across the 16 active handsets over the first five weeks of the trial, average broadcast listening measured at just over two hours per day, which would be the equivalent of around 1.5 GB of data over a month in the conventional unicast scenario. “This a very significant proportion of the average monthly mobile data per

The trial demonstrated that people liked the convenience of having radio readily available on a smartphone.

A crowd-sourced coverage map built on data coming from the BBC app installed on trial receiver.

active connection in the U.K. of around 1.9 GB per month and would leave little allowance for other uses,” he added. The trial demonstrated that people liked the convenience of having radio readily available on a smartphone, and almost all (9 in 10) were satisfied with trial internet service. They often used the handsets as mobile hotspots, giving

them access to faster download speeds for films and music. BETTER OPTIONS Anecdotal evidence from teachers at the island’s junior high school — backed up by data from the devices — suggests that teenagers in Stronsay have become big fans of the music played on the BBC’s Asian Network, one of the 13 BBC stations they could access as part of the trial.

5G as a technology is still being developed and deployed, and it has a completely different level of maturity with respect to, for example, DAB digital radio. “The BBC will continue working in this space together with the European Broadcasting Union to try to influence current and future standards that provide broadcasters with better options for these purposes,” Murphy concluded. Davide Moro holds a Master of Science in engineering and has been a radio enthusiast since the age of seven, when he first began as a radio presenter. He lives in Bergamo, Italy, has worked for Telecom Italia and the Italian public broadcast RAI, and specializes in RF coverage planning, network design and field measurement.

WORLDCAST SETS UP NEW OFFICE IN MALAYSIA WorldCast Group recently opened a new office in Kuala Lumpur, Malaysia. The group, which comprises WorldCast Systems and CONNECT, explains that it chose Kuala Lumpur for its new office because of the city’s strategic and central location. Kuala Lumpur, it says, is ideal for providing customers and partners in the Asian market with the “best” local service. Christophe Poulain is The new WorldCast Group office officially co-president of WorldCast opened mid-January. Victor Bidot, regional Group. sales manager and Bastien Bahuet, pre-sales engineer will use the new location as their base. The expansion, says WorldCast, consolidates its global presence, which now generates 85% of its turnover from exports. “For several years now, we’ve had a sales representative in India and with an increasing number of opportunities presented to us in Asia, especially China, Japan, Korea and Southeast Asia,” said Christophe Poulain, co-president of WorldCast Group. “We are enthusiastic about establishing this new office in the region.”

The BBC R&amp;D is working on 5G technology to provide broadcasters with better connectivity options.