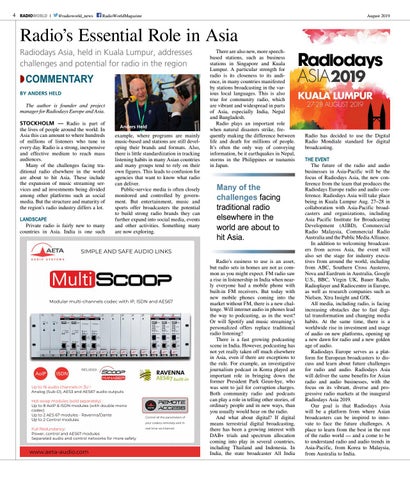 Radio’s Essential Role in Asia Radiodays Asia, held in Kuala Lumpur, addresses challenges and potential for radio in the region

The author is founder and project manager for Radiodays Europe and Asia.

STOCKHOLM — Radio is part of

the lives of people around the world. In Asia this can amount to where hundreds of millions of listeners who tune in every day. Radio is a strong, inexpensive and effective medium to reach mass audiences. Many of the challenges facing traditional radio elsewhere in the world are about to hit Asia. These include the expansion of music streaming services and ad investments being divided among other platforms such as social media. But the structure and maturity of the region’s radio industry differs a lot. LANDSCAPE Private radio is fairly new to many countries in Asia. India is one such

example, where programs are mainly music-based and stations are still developing their brands and formats. Also, there is little standardization in tracking listening habits in many Asian countries and many groups tend to rely on their own figures. This leads to confusion for agencies that want to know what radio can deliver. Public-service media is often closely monitored and controlled by government. But entertainment, music and sports offer broadcasters the potential to build strong radio brands they can further expand into social media, events and other activities. Something many are now exploring.

There are also new, more speechbased stations, such as business stations in Singapore and Kuala Lumpur. A particular strength for radio is its closeness to its audience, in many countries manifested by stations broadcasting in the various local languages. This is also true for community radio, which are vibrant and widespread in parts of Asia, especially India, Nepal and Bangladesh. Radio plays an important role when natural disasters strike, frequently making the difference between life and death for millions of people. It’s often the only way of conveying information, be it earthquakes in Nepal, storms in the Philippines or tsunamis in Japan.

Many of the challenges facing traditional radio elsewhere in the world are about to hit Asia.

Up to 16 audio channels in 3U ! Analog (Sub-D), AES3 and AES67 audio outputs Hot-swap modules (sold separately) : Up to 8 AoIP & ISDN modules (with double mono codec) Up to 2 AES 67 modules - Ravenna/Dante Up to 2 Control modules Full Redundancy: Power, control and AES67 modules Separated audio and control networks for more safety

Control all the parameters of your codecs remotely and in real time via Internet.

Radio’s easiness to use is an asset, but radio sets in homes are not as common as you might expect. FM radio saw a rise in listenership in India when nearly everyone had a mobile phone with built-in FM receivers. But today with new mobile phones coming into the market without FM, there is a new challenge. Will internet audio in phones lead the way to podcasting, as in the west? Or will Spotify and music streaming´s personalized offers replace traditional radio listening? There is a fast growing podcasting scene in India. However, podcasting has not yet really taken off much elsewhere in Asia, even if there are exceptions to the rule. For example, an investigative journalism podcast in Korea played an important role in bringing down the former President Park Geun-hye, who was sent to jail for corruption charges. Both community radio and podcasts can play a role in telling other stories, of ordinary people and in new ways, than you usually would hear on the radio. And what about digital? If digital means terrestrial digital broadcasting, there has been a growing interest with DAB+ trials and spectrum allocation coming into play in several countries, including Thailand and Indonesia. In India, the state broadcaster All India

Radio has decided to use the Digital Radio Mondiale standard for digital broadcasting. THE EVENT The future of the radio and audio businesses in Asia-Pacific will be the focus of Radiodays Asia, the new conference from the team that produces the Radiodays Europe radio and audio conference. Radiodays Asia will take place being in Kuala Lumpur Aug. 27–28 in collaboration with Asia-Pacific broadcasters and organizations, including Asia Pacific Institute for Broadcasting Development (AIBD), Commercial Radio Malaysia, Commercial Radio Australia and the Public Media Alliance. In addition to welcoming broadcasters from across Asia, the event will also set the stage for industry executives from around the world, including from ABC, Southern Cross Austereo, Nova and Eardrum in Australia, Google U.S., BBC, Virgin UK, Bauer Radio, Radioplayer and Radiocentre in Europe, as well as research companies such as Nielsen, Xtra Insight and GfK. All media, including radio, is facing increasing obstacles due to fast digital transformation and changing media habits. At the same time, there is a worldwide rise in investment and usage of audio on new platforms, opening up a new dawn for radio and a new golden age of audio. Radiodays Europe serves as a platform for European broadcasters to discuss and learn about future challenges for radio and audio. Radiodays Asia will deliver the same benefits for Asian radio and audio businesses, with the focus on its vibrant, diverse and progressive radio markets at the inaugural Radiodays Asia 2019. Our goal is that Radiodays Asia will be a platform from where Asian broadcasters can be inspired to innovate to face the future challenges. A place to learn from the best in the rest of the radio world — and a come to be to understand radio and audio trends in Asia-Pacific, from Korea to Malaysia, from Australia to India.