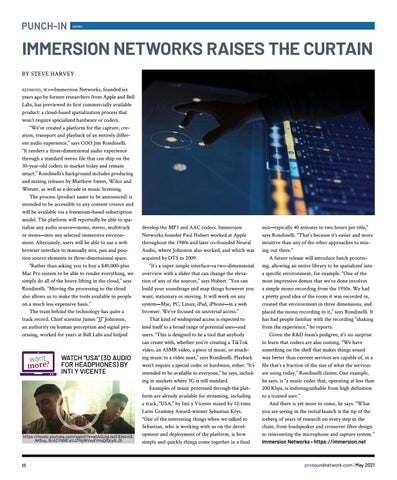 Networks, founded six years ago by former researchers from Apple and Bell Labs, has previewed its first commercially available product: a cloud-based spatialization process that won’t require specialized hardware or codecs. “We’ve created a platform for the capture, creation, transport and playback of an entirely different audio experience,” says COO Jim Rondinelli. “It renders a three-dimensional audio experience through a standard stereo file that can ship on the 30-year-old codecs in market today and remain intact.” Rondinelli’s background includes producing and mixing releases by Matthew Sweet, Wilco and Weezer, as well as a decade in music licensing. The process (product name to be announced) is intended to be accessible to any content creator and will be available via a freemium-based subscription model. The platform will reportedly be able to spatialize any audio source—mono, stereo, multitrack or stems—into any selected immersive environment. Alternately, users will be able to use a web browser interface to manually mix, pan and position source elements in three-dimensional space. “Rather than asking you to buy a $40,000-plus Mac Pro system to be able to render everything, we simply do all of the heavy lifting in the cloud,” says Rondinelli. “Moving the processing to the cloud also allows us to make the tools available to people on a much less expensive basis.” The team behind the technology has quite a track record. Chief scientist James “JJ” Johnston, an authority on human perception and signal processing, worked for years at Bell Labs and helped

develop the MP3 and AAC codecs. Immersion Networks founder Paul Hubert worked at Apple throughout the 1980s and later co-founded Neural Audio, where Johnston also worked, and which was acquired by DTS in 2009. “It’s a super simple interface—a two-dimensional overview with a slider that can change the elevation of any of the sources,” says Hubert. “You can build your soundstage and map things however you want, stationary or moving. It will work on any system—Mac, PC, Linux, iPad, iPhone—in a web browser. We’ve focused on universal access.” That kind of widespread access is expected to lend itself to a broad range of potential uses—and users. “This is designed to be a tool that anybody can create with, whether you’re creating a TikTok video, an ASMR video, a piece of music, or attaching music to a video asset,” says Rondinelli. Playback won’t require a special codec or hardware, either. “It’s intended to be available to everyone,” he says, including in markets where 3G is still standard. Examples of music processed through the platform are already available for streaming, including a track, “USA,” by Inti y Vicente mixed by 12-time Latin Grammy Award-winner Sebastian Krys. “One of the interesting things when we talked to Sebastian, who is working with us on the development and deployment of the platform, is how simply and quickly things come together in a final

mix—typically 40 minutes to two hours per title,” says Rondinelli. “That’s because it’s easier and more intuitive than any of the other approaches to mixing out there.” A future release will introduce batch processing, allowing an entire library to be spatialized into a specific environment, for example. “One of the most impressive demos that we’ve done involves a simple mono recording from the 1950s. We had a pretty good idea of the room it was recorded in, created that environment in three dimensions, and placed the mono recording in it,” says Rondinelli. It has had people familiar with the recording “shaking from the experience,” he reports. Given the R&D team’s pedigree, it’s no surprise to learn that codecs are also coming. “We have something on the shelf that makes things sound way better than current services are capable of, in a file that’s a fraction of the size of what the services are using today,” Rondinelli claims. One example, he says, is “a music codec that, operating at less than 200 Kbps, is indistinguishable from high definition to a trained user.” And there is yet more to come, he says. “What you are seeing in the initial launch is the tip of the iceberg of years of research on every step in the chain, from loudspeaker and crossover filter design to reinventing the microphone and capture system.” Immersion Networks • https://immersion.net