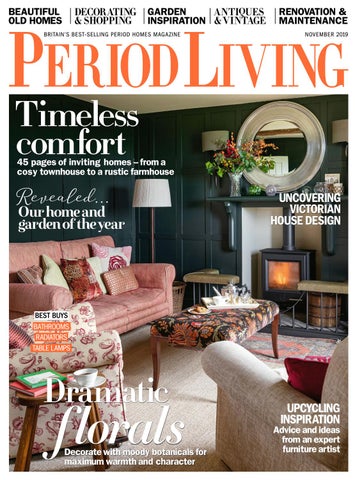 45 pages of inviting homes â&#x20AC;&#x201C; from a cosy townhouse to a rustic farmhouse

Revealed... Our home and garden of the year

Decorate with moody botanicals for maximum warmth and character

Advice and ideas from an expert furniture artist

Journal We round up the latest interiors offerings, news and exhibitions Energising evergreen As winter takes hold, be inspired by the green shades of the forest ON THE COVER Shop for table lamps We round up our favourite designs to create a cosy atmosphere ON THE COVER Moody florals Layer flamboyant botanicals in dark shades to create drama

Made in Britain We visit upcycling furniture artist Jonathon Marc Mendes The great designers Marc Allum explores the life and work of Arts and Crafts luminary C.F.A. Voysey Food journal Events, eateries and kitchen essentials for keen home cooks Recipes Conjure up these delicious yet time-saving meals in 30 minutes November journal The best activities to get you out and about this month

A labour of love Winning home of the year, Tom and Jenny Williams’ home was created from a former laundry

The Boyles have breathed new life into a cherished farmhouse

The latest products for your garden, and horticultural advice

New products and expert advice for improving a period home

Where to find all the suppliers featured in this issue

ON THE COVER Floral symphony Winners of best garden, Tim and Olivia Payne’s cottage scheme is a delight for the senses

Reclamation Behind the scenes at Symonds Salvage, specialist in reclaimed original building materials

pretty g in If there’s any

time to invest in a new suite it’s autumn, all ready for snuggling up during the long winter evenings. New from Nordic House, the Allegra velvet range in delicate Chiffon Pink oozes timeless elegance and is perfect for creating a calm yet cosy feel. Team with plenty of sheepskins for extra hygge magic. From £1,195 for an armchair.

The Shorty locker, in Olive, £129, Mustard Made

Lario placemats in Olive, £36 for a set of 4, Designers Guild

New Romantics Create an interior bursting with elegance and period drama by layering flamboyant, floral prints that draw on design history. For an unexpected twist choose moody, bold colour palettes with hints of pastel and team with the luxurious textures of silk and velvet

Nothing says romance like the classic English rose. For a fresh take on traditional country designs, dare to go dark with this striking Rose wallpaper in Cerise, Burnt Orange and Deep Black, from Cole & Son. Part of the Botanica collection, itâ&#x20AC;&#x2122;s guaranteed to turn heads in a dining room. ÂŁ105 per roll.

If you’re a fan of historic florals and are colour confident, why not create the ultimate feature wall with an oversized mural? Evoking the grandeur of the Dutch Golden Age, this enlarged version of Jan Davidsz. De Heem’s A Vase of Flowers with Berries and Insects, is perfectly paired with a luxurious velvet sofa. £40 per m2 from the Ashmolean Museum Collection at Surface View. ➤ Period Living 23

Opposite: Jonathon uses a variety of brushes to achieve his paint techniques. â&#x20AC;&#x2DC;Every one will add a different texture; the brush is an extension of my creativityâ&#x20AC;&#x2122; This image: His workshop occupies the basement of a Grade II-listed former coach house in Caistor, Lincolnshire. He transformed the MDF doors to the paint cupboard using his Industrial Rust paint technique, to complement the rusty beams and industrial heritage of the building

The back hall, with wall-to-ceiling cupboards made by Gwyn Dowell. The flooring is limestone, which works well with the underfloor heating, and the walls and cupboards are painted in Farrow & Ballâ&#x20AC;&#x2122;s Oval Room Blue

Renovated Laundry Amber in the bootroom, which was an important addition for family life with three boys and two dogs. The oak-framed walkway, from Pawswood, provides extra shelter. The wall paint is Farrow & Ballâ&#x20AC;&#x2122;s Light Blue and the floor tiles were salvaged from elsewhere in the house. The pendant light is from The French House, and the church pew and shelves are from Four Oaks. Old port cases make handy storage boxes for scarves and gloves

Lis and John knocked through a wall to create one large kitchen-dining space. The dining area occupies the oldest part of the farmhouse, which dates back to the late 1600s and has incredible views across Hope Valley. The floor is paved with original Yorkstone flags complete with years of marks and wear. The Rayburn was bought secondhand in the early 1960s to heat the house and has recently been reconditioned by Phil Green & Son. ‘It is an early model of a Rayburn as it has one hotplate rather than two,’ says Lis. The settle, table, corner cupboard and mirror have all been in the house for several generations, while the wooden chairs were bought from Penrose Interiors and the glass pendant from Pooky 54 Period Living

Lasting impressions A chance encounter with a historic death mask in a museum had such an impact on Peter Malone, that he started to collect and create his own plaster casts, displaying them in the elegant townhouse he shares with wife Helen Words Hannah Newton | Photographs and styling Solesbury & Worthy

Peter based his designs for the bookcases in this upstairs living room, on the frontage of Ironmongers’ Hall in London. A treasured cast of Admiral Nelson keeps watch over the room, while a 1960s Swedish chair, picked up on Portobello Road, has been upholstered in toile – a quirky choice of fabric for the mid-century modern classic. The silk cushions are from Oka. Peter and Helen have had the vintage throw and rugs for years. The walls above the dado rail are painted in Farrow & Ball’s Apple Green, with String below it

Just north of Inverness, the Scottish village of Strathpeffer was a popular destination for wealthy Victorians, drawn here by the health benefits of the sulphur springs. Tinaâ&#x20AC;&#x2122;s house was built in 1895 but had suffered years of neglect before she and her late husband John took it on in 1992

Continuing his series looking at the fascinating design history of different eras, conservation and heritage expert Lee Bilson examines the homes that make up the majority of our period housing stock

he Victorian era is mostly seen as a period of great growth and building, but it was in fact a time of boom and bust. What is certain is more building and rebuilding occurred in this period than ever before. Great industrialists controlled huge wealth, while land became notoriously cheap. Towns and cities grew in response to the ever-dwindling agricultural system, sending flocks of country folk to cities and towns in search of work. Suburban developments were widespread with the villa now becoming a ubiquitous term for ever smaller homes. It is the plethora of Victorian properties from which the bulk of our built heritage now descends, and while many today appreciate the intricacies and enchantments of Victorian architecture this was not always so – with widespread destruction of Victorian buildings under post-war reconstruction. Despite this, just under a third of all listed buildings date from the 19th century, illustrating the rapid and enormous population growth, and great expansion of building associated with this. But today Victorian homes are cherished, hugely diverse, beautiful, and familiar in our everyday life, forming a major part of our towns and cities.

Design evolution The sheer quantity of Victorian buildings can easily make understanding their architecture and design overwhelming to even experienced architectural minds, as both new and old styles, with new techniques, were appearing simultaneously. The proliferation of styles, running in parallel to each other, crossed all ranges of house types and social classes. This was a period of factionalism in British architectural circles. Followers of the Italianate style looked back at Renaissance palazzi or Tuscan farmhouses for inspiration, the romantic Gothicinspired architects developed Tudor-Gothic through to castle styles, with others advancing Elizabethan, Jacobean, and Queen Anne styles, with almost everything in between. But despite the eclecticism of Victorian architecture it is very easy to spot and read the details with a little guidance.

style for the masses For some the idea of Victorian housing brings to mind long, somewhat plain terraces, but even the simplest of Victorian homes that remain today have an abundance of characterful details – from terracotta detailing on façades and rooftops, to

Opposite left: This home exhibits many of the popular features of houses built at the turn of the century including a mock Tudor gable and roughcast Opposite right: A Victorian terraced home with the typical bay window and painted in original colours Above left: Original cast-iron fireplace with decorative tiles Above: In the latter part of the period, front doors were typically paired in deep recesses. Here, terracotta detailing is incorporated into the faรงade, beneath the upper window, and the roof features ridge tiles and finials Left: Stained glass and decorative encaustic tiled floors became features in the homes of the masses

bare beauty Winter’s low sunshine beautifully illuminates brilliant stems and textural bark, and now is a good time to add some of the best examples of these to your garden Words and photographs Leigh Clapp

Dainty snowdrops appear from January and will create a carpet of white under the gleaming bark of Prunus serrula, backed by a fiery hedge of Cornus sanguinea ‘Midwinter Fire’

With our increasingly busy lives, it can be a struggle to conjure up delicious yet quick-to-prepare dishes. These tempting recipes by John Whaite can be cooked in under 30 minutes Period Living 149

Heritage weekend... Tewkesbury This unassuming market town is a history lover’s paradise, home to royal battles, beautiful period buildings and charming places to eat and shop Above: St Mary’s Church in the grounds of Sudeley Castle, which is the resting place of Henry VIII’s last wife Catherine Parr Left: A 1936 illustration of the famous Hop Pole Hotel, as published in Old Inns – A Series of 40

edieval half-timbered buildings and classic Tudor cottages mingle with elegant Georgian and Victorian townhouses to create Tewkesbury’s iconic patchwork high street. There are over 350 listed buildings in the town, and one of the most notable is the 15th-century Royal Hop Pole Hotel in Church Street. Still in operation, it found its fame as a watering hole for Samuel Pickwick in Charles Dickens’ Pickwick Papers. Outside of literature, Tewkesbury earned its place as a town of historic significance as the site of one of the most decisive battles in the War of the Roses. On 4 May 1471, the House of Lancaster met the House of York on the battlefield and the ensuing clash resulted in the death of the Lancaster heir to the throne, Edward, Prince of Wales. The Battle of Tewkesbury temporarily restored political stability to England until the death of Edward IV in 1483. Visit the Tewkesbury Museum on Barton Street to discover more of the city’s Plantagenet heritage. (tewkesburymuseum.org)