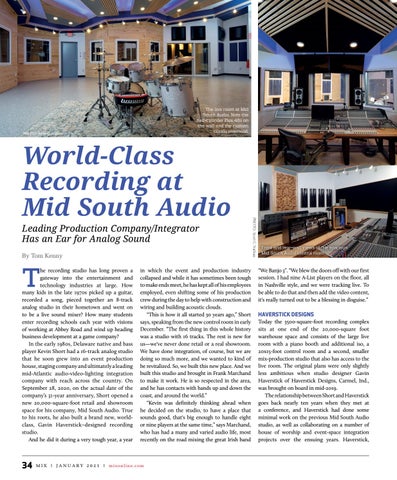 The live room at Mid South Audio. Note the half-cylinder Flex 48s on the wall and the custom clouds overhead.

he recording studio has long proven a gateway into the entertainment and technology industries at large. How many kids in the late 1970s picked up a guitar, recorded a song, pieced together an 8-track analog studio in their hometown and went on to be a live sound mixer? How many students enter recording schools each year with visions of working at Abbey Road and wind up heading business development at a game company? In the early 1980s, Delaware native and bass player Kevin Short had a 16-track analog studio that he soon grew into an event production house, staging company and ultimately a leading mid-Atlantic audio-video-lighting integration company with reach across the country. On September 28, 2020, on the actual date of the company’s 31-year anniversary, Short opened a new 20,000-square-foot retail and showroom space for his company, Mid South Audio. True to his roots, he also built a brand new, worldclass, Gavin Haverstick–designed recording studio. And he did it during a very tough year, a year

in which the event and production industry collapsed and while it has sometimes been tough to make ends meet, he has kept all of his employees employed, even shifting some of his production crew during the day to help with construction and wiring and building acoustic clouds. “This is how it all started 30 years ago,” Short says, speaking from the new control room in early December. “The first thing in this whole history was a studio with 16 tracks. The rest is new for us—we've never done retail or a real showroom. We have done integration, of course, but we are doing so much more, and we wanted to kind of be revitalized. So, we built this new place. And we built this studio and brought in Frank Marchand to make it work. He is so respected in the area, and he has contacts with bands up and down the coast, and around the world.” “Kevin was definitely thinking ahead when he decided on the studio, to have a place that sounds good, that's big enough to handle eight or nine players at the same time,” says Marchand, who has had a many and varied audio life, most recently on the road mixing the great Irish band

“We Banjo 3”. “We blew the doors off with our first session. I had nine A-List players on the floor, all in Nashville style, and we were tracking live. To be able to do that and then add the video content, it's really turned out to be a blessing in disguise.” HAVERSTICK DESIGNS Today the 3500-square-foot recording complex sits at one end of the 20,000-square foot warehouse space and consists of the large live room with a piano booth and additional iso, a 20x15-foot control room and a second, smaller mix-production studio that also has access to the live room. The original plans were only slightly less ambitious when studio designer Gavin Haverstick of Haverstick Designs, Carmel, Ind., was brought on board in mid-2019. The relationship between Short and Haverstick goes back nearly ten years when they met at a conference, and Haverstick had done some minimal work on the previous Mid South Audio studio, as well as collaborating on a number of house of worship and event-space integration projects over the ensuing years. Haverstick,