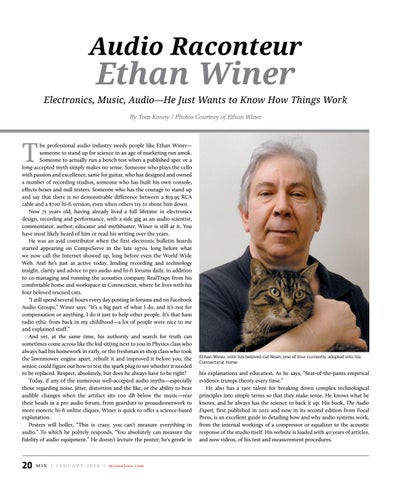 he professional audio industry needs people like Ethan Winer— someone to stand up for science in an age of marketing run amok. Someone to actually run a bench test when a published spec or a long-accepted myth simply makes no sense. Someone who plays the cello with passion and excellence, same for guitar, who has designed and owned a number of recording studios, someone who has built his own console, effects boxes and null testers. Someone who has the courage to stand up and say that there is no demonstrable difference between a $19.95 RCA cable and a $700 hi-fi version, even when others try to shout him down. Now 71 years old, having already lived a full lifetime in electronics design, recording and performance, with a side gig as an audio scientist, commentator, author, educator and mythbuster, Winer is still at it. You have most likely heard of him or read his writing over the years. He was an avid contributor when the first electronic bulletin boards started appearing on CompuServe in the late 1970s, long before what we now call the Internet showed up, long before even the World Wide Web. And he’s just as active today, lending recording and technology insight, clarity and advice to pro audio and hi-fi forums daily, in addition to co-managing and running the acoustics company RealTraps from his comfortable home and workspace in Connecticut, where he lives with his four beloved rescued cats. “I still spend several hours every day posting in forums and on Facebook Audio Groups,” Winer says. “It’s a big part of what I do, and it’s not for compensation or anything. I do it just to help other people. It’s that ham radio ethic from back in my childhood—a lot of people were nice to me and explained stuff.” And yet, at the same time, his authority and search for truth can sometimes come across like the kid sitting next to you in Physics class who always had his homework in early, or the freshman in shop class who took the lawnmower engine apart, rebuilt it and improved it before you, the senior, could figure out how to test the spark plug to see whether it needed to be replaced. Respect, absolutely, but does he always have to be right? Today, if any of the numerous well-accepted audio myths—especially those regarding noise, jitter, distortion and the like, or the ability to hear audible changes when the artifact sits 100 dB below the music—rear their heads in a pro audio forum, from gearslutz to proaudionetwork to more esoteric hi-fi online cliques, Winer is quick to offer a science-based explanation. Posters will holler, “This is crazy, you can’t measure everything in audio.” To which he politely responds, “You absolutely can measure the fidelity of audio equipment.” He doesn’t lecture the poster; he’s gentle in

Ethan Winer, with his beloved cat Noah, one of four currently adopted into his Connecticut home.

his explanations and education. As he says, “Seat-of-the-pants empirical evidence trumps theory every time.” He also has a rare talent for breaking down complex technological principles into simple terms so that they make sense. He knows what he knows, and he always has the science to back it up. His book, The Audio Expert, first published in 2012 and now in its second edition from Focal Press, is an excellent guide in detailing how and why audio systems work, from the internal workings of a compressor or equalizer to the acoustic response of the studio itself. His website is loaded with 40 years of articles, and now videos, of his test and measurement procedures.