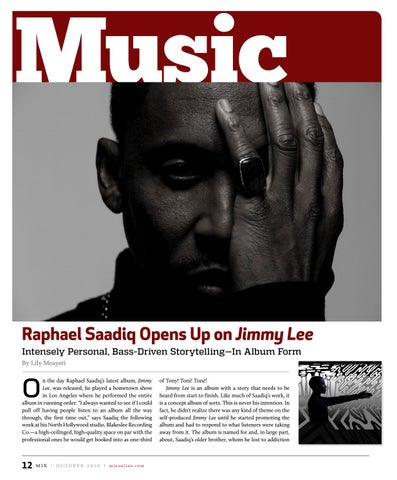 n the day Raphael Saadiq’s latest album, Jimmy Lee, was released, he played a hometown show in Los Angeles where he performed the entire album in running order. “I always wanted to see if I could pull off having people listen to an album all the way through, the first time out,” says Saadiq the following week at his North Hollywood studio, Blakeslee Recording Co.—a high-ceilinged, high-quality space on par with the professional ones he would get booked into as one-third

of Tony! Toni! Toné! Jimmy Lee is an album with a story that needs to be heard from start to finish. Like much of Saadiq’s work, it is a concept album of sorts. This is never his intention. In fact, he didn’t realize there was any kind of theme on the self-produced Jimmy Lee until he started promoting the album and had to respond to what listeners were taking away from it. The album is named for and, in large part, about, Saadiq’s older brother, whom he lost to addiction