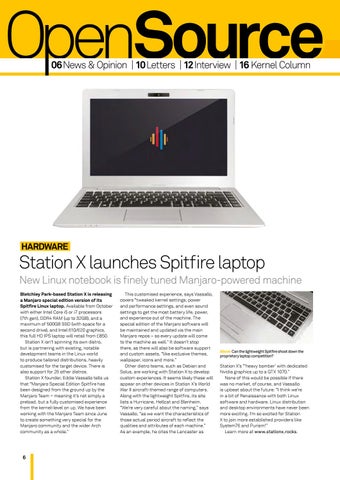 Station X launches Spitfire laptop New Linux notebook is finely tuned Manjaro-powered machine Bletchley Park-based Station X is releasing a Manjaro special edition version of its Spitfire Linux laptop. Available from October with either Intel Core i5 or i7 processors (7th gen), DDR4 RAM (up to 32GB), and a maximum of 500GB SSD (with space for a second drive), and Intel 610/620 graphics, this full HD IPS laptop will retail from £850. Station X isn’t spinning its own distro, but is partnering with existing, notable development teams in the Linux world to produce tailored distributions, heavily customised for the target device. There is also support for 26 other distros. Station X founder, Eddie Vassallo tells us that “Manjaro Special Edition Spitfire has been designed from the ground up by the Manjaro Team – meaning it’s not simply a preload, but a fully customised experience from the kernel-level on up. We have been working with the Manjaro Team since June to create something very special for the Manjaro community and the wider Arch community as a whole.”

This customised experience, says Vassallo, covers “tweaked kernel settings, power and performance settings, and even sound settings to get the most battery life, power, and experience out of the machine. The special edition of the Manjaro software will be maintained and updated via the main Manjaro repos – so every update will come to the machine as well.” It doesn’t stop there, as there will also be software support and custom assets, “like exclusive themes, wallpaper, icons and more.” Other distro teams, such as Debian and Solus, are working with Station X to develop custom experiences. It seems likely these will appear on other devices in Station X’s World War II aircraft-themed range of computers. Along with the lightweight Spitfire, its site lists a Hurricane, Hellcat and Blenheim. “We’re very careful about the naming,” says Vassallo, “as we want the characteristics of those actual period aircraft to reflect the qualities and attributes of each machine.” As an example, he cites the Lancaster as

Above Can the lightweight Spitfire shoot down the proprietary laptop competition?

Station X’s “‘heavy bomber’ with dedicated Nvidia graphics up to a GTX 1070.” None of this would be possible if there was no market, of course, and Vassallo is upbeat about the future: “I think we’re in a bit of Renaissance with both Linux software and hardware. Linux distribution and desktop environments have never been more exciting. I’m so excited for Station X to join more established providers like System76 and Purism!” Learn more at www.stationx.rocks.