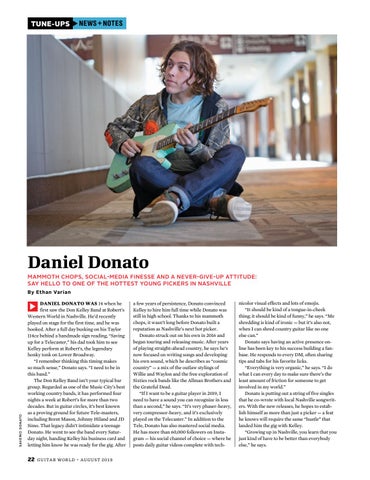 MAMMOTH CHOPS, SOCIAL-MEDIA FINESSE AND A NEVER-GIVE-UP ATTITUDE: SAY HELLO TO ONE OF THE HOTTEST YOUNG PICKERS IN NASHVILLE

By Ethan Varian DANIEL DONATO WAS 14 when he first saw the Don Kelley Band at Robert’s Western World in Nashville. He’d recently played on stage for the first time, and he was hooked. After a full day busking on his Taylor 114ce behind a handmade sign reading, “Saving up for a Telecaster,” his dad took him to see Kelley perform at Robert’s, the legendary honky tonk on Lower Broadway. “I remember thinking this timing makes so much sense,” Donato says. “I need to be in this band.” The Don Kelley Band isn’t your typical bar group. Regarded as one of the Music City’s best working country bands, it has performed four nights a week at Robert’s for more than two decades. But in guitar circles, it’s best known as a proving ground for future Tele-masters, including Brent Mason, Johnny Hiland and JD Simo. That legacy didn’t intimidate a teenage Donato. He went to see the band every Saturday night, handing Kelley his business card and letting him know he was ready for the gig. After

a few years of persistence, Donato convinced Kelley to hire him full time while Donato was still in high school. Thanks to his mammoth chops, it wasn’t long before Donato built a reputation as Nashville’s next hot picker. Donato struck out on his own in 2016 and began touring and releasing music. After years of playing straight-ahead country, he says he’s now focused on writing songs and developing his own sound, which he describes as “cosmic country” — a mix of the outlaw stylings of Willie and Waylon and the free exploration of Sixties rock bands like the Allman Brothers and the Grateful Dead. “If I want to be a guitar player in 2019, I need to have a sound you can recognize in less than a second,” he says. “It’s very phaser-heavy, very compressor-heavy, and it’s exclusively played on the Telecaster.” In addition to the Tele, Donato has also mastered social media. He has more than 60,000 followers on Instagram — his social channel of choice — where he posts daily guitar videos complete with tech-

nicolor visual effects and lots of emojis. “It should be kind of a tongue-in-cheek thing; it should be kind of funny,” he says. “Me shredding is kind of ironic — but it’s also not, when I can shred country guitar like no one else can.” Donato says having an active presence online has been key to his success building a fanbase. He responds to every DM, often sharing tips and tabs for his favorite licks. “Everything is very organic,” he says. “I do what I can every day to make sure there’s the least amount of friction for someone to get involved in my world.” Donato is putting out a string of five singles that he co-wrote with local Nashville songwriters. With the new releases, he hopes to establish himself as more than just a picker — a feat he knows will require the same “hustle” that landed him the gig with Kelley. “Growing up in Nashville, you learn that you just kind of have to be better than everybody else,” he says.