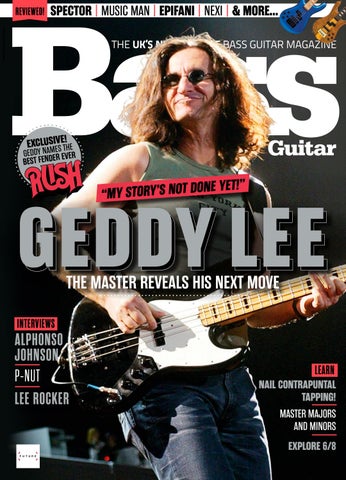 GEDDY LEE THE MASTER REVEALS HIS NEXT MOVE

THE LOWDOWN Technique of the Month

ello again, bottom-end groovers of the world, and welcome back! This month we finish up our look at a piece I wrote in the pre-Pro-Tools days, when I actually had to play the notes below, and in time! Amazing, huh? If you heard this track now, you would assume that there are two overdubbed bass parts, but no, no, no, this is probably the most finger- and brain-bending example of two-handed independent bass tapping that I ever wrote and recorded. It was originally recorded on a Kubicki X-Factor bass, which had a short scale 32” neck, so when I play it now on my full-scale 34” neck, it makes playing the parts cleanly even harder! Let’s start by learning each of the two parts separately, and then, when you have them in control under your fingers, we’ll combine them into this awesome Hamm bass-line. We start by setting up an ostinato of sextuplets in B minor. Actually, what’s supposed to happen is that the keys or guitar start this line while the bass holds down a low E, and then the bass doubles the line an octave higher – but for the purposes of this article let’s jump straight to the to the meat and potatoes of the lick. Brace yourself! Each of the two triplet phrases are fingered the same way, tapping the first note down with the first finger of your left hand, hammering down the minor third of each arpeggio, and then tapping the upper

“IF YOU HEARD THIS TRACK NOW, YOU WOULD ASSUME THAT THERE ARE TWO OVERDUBBED BASS PARTS”

Geddy Lee led the prog-rock giants Rush from 1968 to 2018. That’s 40 long years. Now that the ultimate power trio have called time, he’s made his mark as an author – but enough about the past… we want to know what his next move might be. Ellen O’Reilly puts the questions to the master eaders with keen memories will recall that we sat down with the mighty Geddy Lee a few months back to discuss his then-new publication, The Big Beautiful Book Of Bass. In that interview we talked about the journey that the Rush frontman had been on during the creation of the book, but we didn’t have space to fit our entire conversation into that issue – so here’s the rest of the amazing afternoon we spent in conversation with Geddy. Here, he covers the incredible depth with which he researched the history of the Fender Jazz bass – you’ll know, of course, that he has a signature model of his own – as well as the choices that lie ahead of him. Once you’ve reached the very top of the rock world, shaken hands with your bandmates and walked away, what do you do with the rest of your life? It’s not as easy a decision as you might think...

“IF I WERE TO DO A RUSH SHOW TOMORROW, I’D HAVE PRETTY SORE FINGERS”

Those Who Can... Teach

When he’s not playing bass alongside Victor Wooten, Anthony Wellington runs the Bassology Around The World events and teaches students... a lot of students. We meet the low-frequency learning guru ike many professional bass players, Anthony Wellington has a multistranded approach to succeeding in the modern commercial environment – and he implements it with a commitment to excellence from which we could all learn. Now in his fifties, the Washington DC-based

player proved his chops long ago by holding down a long-term position as second bassist in Victor Wooten’s band, a position that requires superhuman confidence and ability. In between those gigs, he delivers his Bassology brand, an educational program that runs international events including cruises, masterclass series, and clinics devoted to bass and music theory education at institutions as prestigious as the Berklee

College of Music, Stanford University and Gerald Veasley’s Bass Bootcamp, aided by gear endorsements from Fodera, Aguilar and Lathon Bass Wear. A bassist with much to teach us then – pun intended. How are the Bassology cruises doing? This is only our second year, but we did the first one last November and it went over so well that before it was over, our students

WHAT WE THINK Plus | Playability, tone range, components quality Minus | The price will be prohibitive for most of us Overall | A top-range bass that ticks all the boxes

WHAT WE THINK Plus | Familar tones, striking looks Minus | Aesthetics won’t be for everybody Overall | Worth considering if you’re in the market for a new Stingray

WHAT WE THINK Plus | Great fun to play, huge sounds on tap Minus | Nothing Overall | Recommended very highly indeed

Example 6 As you gain more performance experience, there are a number of different variants of a conventional 12-bar blues that you’ll encounter. One such alteration is referred to as a ‘quick change’; this is where the progression prematurely moves to the subdominant in the second bar. Another modification that appears in all manner of blues progressions, giving more minor tonality, is affectionately referred to as a ‘BB turnaround’, a testament to the late and legendary BB King. Notice how the chord progression in the following switches between V and bVI chords at bar six. You’ll find these changes particularly pleasing to improvise over, with their adjacent semitones.

Example 7 In this example, a shuffle feel has been employed that alters the overall vibe of the piece. There are two significant moments: the first in bar four, where melodic information is formed from the inversions of a Gmin7 arpeggio. The second is a 6/8 permutation in the final bar, where your rhythmic interpretation skills will be required to decipher what’s intended.

Joe Shooman signs off each issue by celebrating an iconic bass guitar This month: Gibson Grabber and Ripper

re you a Grabber or a Ripper? On the Grabber side, you’ve the likes of Gene Simmons, John Entwistle, Mike Dirnt and Suzi Quatro, while Ripper players have included Greg Lake, Justin MeldalJohnsen and Krist Novoselic. These Gibson basses were both introduced in 1973. How have they aged? The Grabber, sometimes called the G1, was designed by Bruce Bolen and Edward Klein to sell at a relatively affordable price point, in the face of intense competition from Far East copyist imports and and the momentous Fender phenomenon. Its build quality was decent, though; early models had a maple body, while later runs were alder. Both versions had a maple fretboard, a maple bolt-on neck and a Flying V-esque headstock. An innovative feature was an adjustable sliding pickup which allowed unique tonal changes on the fly, and this was also the first time that Gibson had used a scarfed neck joint. This allowed the headstock to be manufactured separately and more efficiently as less wood was used. Stringing was through the body rather than at the bridge, necessitating longer strings which weren’t easy to find at the time. The dirty, fuzzy sound was perfect for the rockers and proto-punks of the Seventies, particularly pushed hot through a great valve amp. The company introduced the G3 in 1975, with three Bill Lawrence-designed single coil switchable pickups with very different tonal qualities in various combinations. The Grabber had had its day by 1983, although it made a comeback with a limited run of 350 in 2009. The G3 had to wait until 2012 for a sort-of reissue, the Grabber 3 70s Tribute Bass, which switched out the Lawrence pickups for Alnico V single-coils, laid out slightly differently. Ralphe Armstrong was instrumental in the development of the Ripper. As he told Fly Guitars, he went to Illinois with John McLaughlin, who introduced him to the luthiers in question: “I met Bruce Bolen and designer Walt Johnston and they asked me to write down what I wanted. That’s how they came up with this bass called the Ripper and the G3 with three 082

pickups.” Armstrong also said that he loved his fretless Ripper for its deep, rich tones and long sustain at the higher registers, enabling satisfyingly sweet glissando work. Bill Lawrence was also involved with that L9-S Ripper, which again had a maple body and neck, although a few had alder bodies in 1975. The headstock was the classic Gibson shape, with a slimmer neck than the Grabber, and this time two of Lawrence’s Super Humbuckers were featured, with a quad control. It’s a gnarlier, more aggressive, richer-toned at

the bottom-end beast, with punchiness dependent on the configuration of those pickups. Weighing around 11 pounds, it’s on the heavy side. The Ripper was discontinued in 1984, but a run of 350 Ripper II basses was issued in 2009 with a three-point bridge and a new T-bird Plus humbucker. So, which is it to be? The bite, crunch and sliding pickup of the Grabber, or the richness and aggression of the Ripper? The answer, of course, is to have one of each. And the G3, and the reissues…