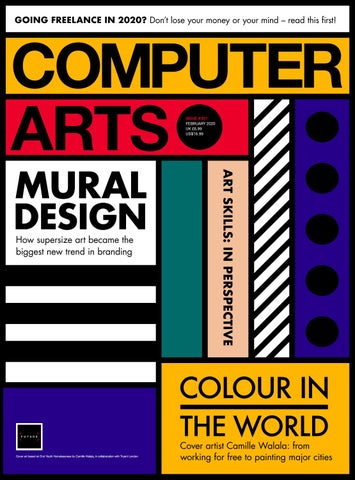 Cover art based on End Youth Homelessness by Camille Walala, in collaboration with Truant London

Made Thought’s pop-up store collaboration with Fred Perry looked to “decode the brand’s DNA” to promote its 544 Collection.

Made Thought has created an installation with Fred Perry promoting its 544 Collection, with designs that “decode the brand’s signature two-line collar ‘tipping’ icon”, according to the studio. “Aesthetically pared back, using exclusively black and white, the collection champions a bold graphic language,” says design lead Rachel Veniard. “Every gesture we made needed to conform to the 544 ratio: in the collection itself, and also influencing the visual world around it.” Design director Radek Wojcik adds that “in the spirit of being subversive,” the collaboration hopes to speak to both fans who recognise the formation and intrigue those who don’t. The pop-up features a window display that was designed by Fred Perry and a live mechanical installation. This sees a printer fed with a paper roll, overlaying coded patterns to create an abstract artwork that can then be cut up into smaller prints, which viewers can take home following the installation’s completion.

Oscar-nominated animation studio Job, Joris &amp; Marieke has created animated advertising for Healthspan supplements, spotlighting the brand’s ingredients and bringing a humorous, light-hearted tone to the campaign. Working with ad agency Isobel and appointed through agency Jelly London, the Utrecht-based trio of creatives put together a campaign that centres on a number of “quirky characters with stylised backgrounds and just the right ukelele tune,” as Job Roggeveen puts it, adding that the studio looked to use “quick camera movements” to bring the limbo background of the films to life. The movies showcase the origins of the supplements’ ingredients, such as cod liver oil. “It was quite a challenge to give the pills their realistic texture and coloring while also making them appealing characters,” says Job. “There was already a storyline, but Isobel invited us to come up with extra funny scenes. This is where the fisherman disappearing in the hole in the ice came from.”

“We spend a lot of time thinking about the perception of space, and how it makes us feel”

ur look is minimal, geometric and clean, to reflect our work. We wanted to have a sensory impact on our employees and on guests – to pique their interest and make them reflect on how design affects perception. When you enter, the studio is framed within a long white tunnel. This reminds guests that as designers, we have the ability to control feelings, focus and framing. There’s also a beautiful, minimalist, mirrored stainless steel ceiling feature that adds some optical play upon entry. Our work is based on elements such as touch, sound, light and perception. We want to drive that home in our space. We’re located in the Brooklyn Navy Yard, a major manufacturing hub for a century, and now an epicentre for contemporary design and building, innovation, technology and research and development. Many design agencies, fabricators, innovators and thinkers are doing incredible work here.

1 THE MIRRORS When you enter the space, you enter into a tunnel, which was designed with mirrorpolished steel affixed in a lenticular pattern. It’s an optical effect in a space meant to be a palette cleanser that reinforces the idea of fresh eyes when visualising creative work. 2 OPTICAL ILLUSIONS Each conference room is named after an optical illusion: Aura, Mirage, Moire and Phantom. We named the rooms as a team. Again, we wanted them to feel reflective of our work, and we spend a lot of time thinking about the perception of space, and how it makes you feel. 3 PROTOTYPE GALLERY We have a prototype gallery in our space, seconding as an art gallery that houses installation prototypes from previous projects that we’ve worked on. The project-scale versions are permanent experiences within Google,

4 RED DRAPES The red drapes are an accent addition to the industrial, stark space. Our conference rooms are lined with glass on each wall, so the drapes provide a bright visual impact, as well as privacy when needed.

5 HUSH TABLE The HUSH “Pink Oak” family table is a custom fabricated, millennial pink table that sits over 30 people. This table was built to be the hub that brings everyone together – whether for brainstorming, happy hour, dinner or just to talk. Local architect Kyle May constructed the table, which is made up of 5/4 oak on three steel frames with offset legs. The tables can be used separately as individual meeting tables, or together as one long communal table. In either situation, there are no adjacent double legs.

WANT TO HAVE YOUR WORK SPACE FEATURED HERE? EMAIL HELLO@COMPUTERARTS.COM

rebrand THE VETERAN INTERNET COMPANY YAHOO HAS HAD A REBRAND COURTESY OF PENTAGRAM. WHAT’S THE PROFESSIONAL VERDICT?

“We worked with the team at Yahoo to find a balance between what’s always made the brand distinctive – the exclamation mark, the colour purple, the yodel – while creating a 21st century identity. The identity reflects a new brand strategy that focuses on helping users find a more personalised, customised experience online. This positions Yahoo as an “amplification brand”: amplifying the things that matter, helping to amplify you. The idea is neatly visualised in the exclamation point, a punctuation mark that literally stands for amplification. We worked with Yahoo to evaluate a range of options. Some were more evocative of the original, quirky 1996 logo with its offset baseline and random angles, while others were completely new. The exclamation mark has been italicised for emphasis, as it has been in every iteration of the logo since Yahoo’s founding. The “y” and “!” are both set at 22.5 degrees, a forward tilt that suggests a sense of momentum. The angle – 1/16th of a circle – is the basis for visual language built around angles and incremental slices.” - 36 -

“In a 21st century internet marketplace, where Yahoo’s actual reach far outshines its casual mention, this rebrand does a fine job of injecting a bit of style and energy back into an otherwise forgotten brand. The new identity by Pentagram shines by way of its sharp choice of sans serif font and fun, angled exclamation mark. In my view the wellcrafted logo, however, can’t carry the rest of the brand, which largely falls flat with its generic colour blocking and angled mortises. The sum of these parts doesn’t add up to anything memorable, and at a time where I don’t know Yahoo too well any more, this visual identity still leaves me wondering who it is and what it stands for. What will be interesting to see is whether Yahoo’s safe step toward a more modern identity is enough to establish it as the relevant and reputable news and media source it clearly wants to be, or if its efforts are just too little, too late.”

“I remember when Yahoo first popped up in the mid 90s. Blur was in the charts and the company I worked at had one computer with a Yahoo search engine. With a whimsical cartoon styling, it slotted in perfectly within early web graphics. Twenty-five years later, the digital design landscape is significantly harder to cut through. We all know humans hate change, but brands can’t stand still: they have to evolve and stay relevant. The work Pentagram has developed undoubtedly revives a sense of style to an tired brand. Book-ending the Y and ! angle creates a bold and confident logo system without losing the OOooo. This new iteration, although simple in nature, still has bags of confidence. The geometric sans serif font gives it a fresher and more youthful direction, which certainly increases flexibility in a purely digital environment. With lots of future animation potential to be had, it reminds us that Yahoo is still alive and kicking, especially if you’re looking for a snazzy pair of Y!-branded socks.”

The exclamation mark in the redesigned logo remains on show, even if â&amp;#x20AC;&amp;#x153;Yahooâ&amp;#x20AC;? is reduced to a capital Y.

fresh eyes MARC ARMAND BRINGS VIBRANT ENERGY TO HIS DESIGN WORK raphic designer Marc Armand’s creative journey began as a Paris schoolboy, painting graffiti both legally and illegally. “Through this I decided to go to art school and then discovered that it could be an actual job,” he says. Today, Marc has an impressive resume, including founding graphic design studio Tu Sais Qui; designing patterns for Desigual and Jean-Paul Goude; a succession of collaborations with Nike; working as creative director of Please! magazine; and spending a year in charge of visual communication for the Villa Noailles art centre in Hyères, southern France.

So what keeps him energised? “I find a lot of inspiration through music,” he says. “A lot of electronics, but also a wide range of different types. I always listen to loud music while working. Fashion design is also a pretty big influence, as well as a few top favorite artists, designers and studios that I always come back to: Tadanori Yokoo, Jonathan Barnbrook, Neville Brody, Alessandro Mendini, Emigre Fonts.” And what of the future? “My plan is to keep having fun working, to keep collaborating with great people,” he says. “I’d like to work more with people and projects abroad, in different countries.”

Pop culture, typography and post-modernism are just some of the touchstones in Marc Armand’s designs. tusaisqui.fr

GOT A FRESH PERSPECTIVE IN ILLUSTRATION OR DESIGN? GET IN TOUCH: HELLO@COMPUTERARTS.COM

Marc has been creative director on Please! magazine and has worked with Jean-Paul Goude on prints and patterns.

ased in south-east London, design consultancy Rose has been delivering superlative work for two decades now. This longevity may surprise some, because the studio – which has just six full-time employees – has enjoyed a relatively discreet profile to date. But in this 20th anniversary year it’s making an exception, launching Rose: Two Decades. It’s a stunning 352-page monograph that showcases just why it’s won over 150 international creative awards. While some studios try to push boundaries with the layout and design of their monograph, Rose has taken a calmer and more measured approach here, allowing the work to speak for itself through full-page images and minimal text (a Bob Dylan quote, a one-page preface and credits at the back). And what great work it is. Showcasing the best of Rose’s brand identities, marketing campaigns, exhibition branding and publication design for more than 90 selected clients – as diverse as BAFTA, Tate Modern, the NFL, Royal Mail and 10bet – this is both a treat for the eyes and inspiration for the design soul. As an added twist, each copy comes with a bespoke foil-blocked, case-bound cover, courtesy of luxury wallpaper brand Sanderson. It’s an inspired and original touch that adds a personal feel to this confident and elegant publication. Rose: Two Decades can be bought from the studio’s website at £40 each, with the first 250 copies being sold at half price.

Rose’s publication design for the V&amp;A and brand identity for ENO are just two of the many projects featured in the book.

THE BIGGER PICTURE ON INDUSTRY ISSUES