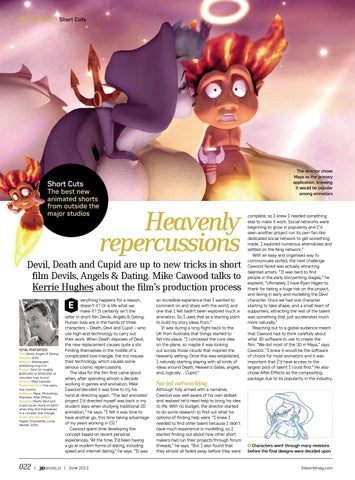 The director chose Maya as the primary application, knowing it would be popular among animators

The best new animated shorts from outside the major studios

Devil, Death and Cupid are up to new tricks in short film Devils, Angels &amp; Dating. Mike Cawood talks to Kerrie Hughes about the film’s production process verything happens for a reason, doesn’t it? Or is life what we make it? It certainly isn’t the latter in short ﬁlm Devils, Angels &amp; Dating. Human lives are in the hands of three characters – Death, Devil and Cupid – who use high-end technology to carry out their work. When Death disposes of Devil, the new replacement causes quite a stir. Finding themselves in the middle of a complicated love triangle, the trio misuse their technology, which causes some serious cosmic repercussions. The idea for the ﬁlm ﬁrst came about when, after spending almost a decade working in games and animation, Mike Cawood decided it was time to try his hand at directing again. “The last animated project I’d directed myself was back in my student days when studying traditional 2D animation,” he says. “I felt it was time to have another go, this time taking advantage of my years working in CG.” Cawood spent time developing the concept based on recent personal experiences. “At the time, I’d been having a go at modern forms of dating, including speed and internet dating,” he says. “It was

an incredible experience that I wanted to comment on and share with the world, and one that I felt hadn’t been explored much in animation. So I used that as a starting point to build my story ideas from.” It was during a long ﬂight back to the UK from Australia that things started to fall into place. “I conceived the core idea on the plane, so maybe it was looking out across those clouds that inspired the heavenly setting. Once this was established, I naturally starting playing with all kinds of ideas around Death, Heaven’s Gates, angels, and, logically… Cupid.”

Although fully armed with a narrative, Cawood was well aware of his own skillset and realised he’d need help to bring his idea to life. With no budget, the director started to do some research to ﬁnd out what his options of ﬁnding help were. “I knew I needed to ﬁnd other talent because I didn’t have much experience in modelling, so I started ﬁnding out about how other short makers had run their projects through forum threads,” he says. “But I also found that they almost all faded away before they were

complete, so I knew I needed something else to make it work. Social networks were beginning to grow in popularity and I’d seen another project run its own fan-like dedicated social network to get something made. I explored numerous alternatives and settled on the Ning network.” With an easy and organised way to communicate sorted, the next challenge Cawood faced was actually attracting talented artists. “It was hard to ﬁnd people in the early storywriting stages,” he explains. “Ultimately I have Ryan Hagen to thank for taking a huge risk on the project, and diving in early and modelling the Devil character. Once we had one character starting to take shape, and a small team of supporters, attracting the rest of the talent was something that just accelerated much more naturally.” Reaching out to a global audience meant that Cawood had to think carefully about what 3D software to use to create the ﬁlm. “We did most of the 3D in Maya,” says Cawood. “I knew it would be the software of choice for most animators and it was important that I’d have access to the largest pool of talent I could ﬁnd.” He also chose After Effects as the compositing package due to its popularity in the industry.

Characters went through many revisions before the final designs were decided upon 3dworldmag.com