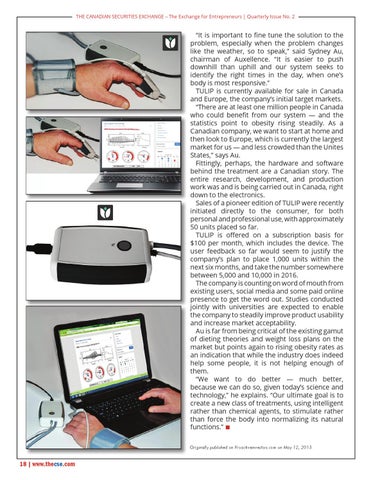 THE CANADIAN SECURITIES EXCHANGE – The Exchange for Entrepreneurs | Quarterly Issue No. 2

“It is important to fine tune the solution to the problem, especially when the problem changes like the weather, so to speak,” said Sydney Au, chairman of Auxellence. “It is easier to push downhill than uphill and our system seeks to identify the right times in the day, when one’s body is most responsive.” TULIP is currently available for sale in Canada and Europe, the company’s initial target markets. “There are at least one million people in Canada who could benefit from our system — and the statistics point to obesity rising steadily. As a Canadian company, we want to start at home and then look to Europe, which is currently the largest market for us — and less crowded than the Unites States,” says Au. Fittingly, perhaps, the hardware and software behind the treatment are a Canadian story. The entire research, development, and production work was and is being carried out in Canada, right down to the electronics. Sales of a pioneer edition of TULIP were recently initiated directly to the consumer, for both personal and professional use, with approximately 50 units placed so far. TULIP is offered on a subscription basis for $100 per month, which includes the device. The user feedback so far would seem to justify the company’s plan to place 1,000 units within the next six months, and take the number somewhere between 5,000 and 10,000 in 2016. The company is counting on word of mouth from existing users, social media and some paid online presence to get the word out. Studies conducted jointly with universities are expected to enable the company to steadily improve product usability and increase market acceptability. Au is far from being critical of the existing gamut of dieting theories and weight loss plans on the market but points again to rising obesity rates as an indication that while the industry does indeed help some people, it is not helping enough of them. “We want to do better — much better, because we can do so, given today’s science and technology,” he explains. “Our ultimate goal is to create a new class of treatments, using intelligent rather than chemical agents, to stimulate rather than force the body into normalizing its natural functions.” n Originally published on Proactiveinvestors.com on May 12, 2015. 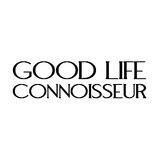